The e-commerce giant's results came after a stunning day for China when at least 20 companies warned investors that full-year earnings would lag expectations. Its resounding beat stemmed in part from a US$3.3 billion accounting gain after revaluing a subsidiary, and executives warned of uncertainty during a deceleration of the world's second largest economy.

China is showing signs of further deterioration, hurting the consumer demand that Alibaba's e-commerce businesses rely on. Still, it's been spearheading a drive into lucrative new spheres such as rural markets, cloud services and entertainment. On Wednesday, Alibaba's chief executive officer Daniel Zhang told analysts those new initiatives as well as a global expansion should help offset the impact of an economic slowdown.

"China's economy is facing some uncertainty, but we do see opportunities," Zhang told analysts on a conference call. "One of the key regions we will stay focused on in the near term is Southeast Asia."

Alibaba's shares rose 6.3 per cent in US trading to their highest level since September. They have slumped 16 per cent in the past 12 months but rallied so far this month.

Net income at China's biggest e-commerce company rose 37 per cent to 33.1 billion yuan in the December quarter, outpacing the 22.1 billion yuan projected. It booked a gain of 21.99 billion yuan (S$4.41 billion) after re-valuing on-demand services arm Koubei. The share of losses from the numerous companies it's invested in also narrowed sharply. Adjusted earnings-per-share was 12.2 yuan compared with the 11.2 yuan projected.

While revenue rose 41 per cent to 117.3 billion yuan, that was the slowest pace in more than two years and lagged the 119.4 billion-yuan projected. Alibaba itself is bracing for more nervous consumers in 2019: in November, it trimmed its sales outlook by as much as 6 per cent. 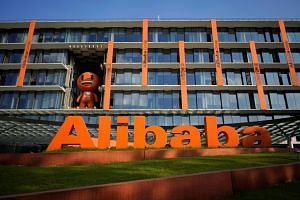 Slowdown in China may get worse before tapering off

"The market might view this as the end of the adjustment period and the worst is behind us, and send shares up," said Eric Wen, founder and CEO of Blue Lotus Capital Advisors. "E-commerce active customer growth is good, mobile monthly active users of e-commerce app is good, but profitability was pretty bad as expected."

Cloud revenue rose 84 per cent in the December quarter, helping the company command half the domestic market for internet-based computing services. Growth also sprang from a decision to take control of delivery network Cainiao, meals-on-demand service Ele.me and video platform Youku. Those expansions however have shifted the company away from an asset-light model.

Alibaba could tap new revenue spigots this year such as personalized feed recommendations, which now generate more traffic than traditional search on its e-commerce platforms. The feed on Taobao, one of Alibaba's largest shopping platforms, pushes products that it thinks users will likely purchase based on their history. Many users browse those recommendations to kill time, driving engagement.

But for now, executives sounded a cautious note on the looming economic uncertainty, joining a chorus from around the globe warning about China's weaker demand.

"While the Chinese economy suggests a bleaker outlook in 2019, the company continues to grow its user base at a healthy rate and is working on monetizing new ad revenue streams, which should keep driving growth in the coming year," said Oscar Orozco, an eMarketer forecasting analyst.