PARIS (REUTERS) - Airbus on Wednesday (July 31) posted stronger-than-expected core second-quarter earnings, led by the switch to efficient new single-aisle jets, and maintained its profit forecast for the year while warning of delivery challenges in the second half.

Analysts were on average forecasting adjusted quarterly operating income of 1.774 billion euros on revenues of 17.824 billion, according to a company-compiled consensus.

Airbus is wrestling with industrial delays at a newly expanded plant in Hamburg, Germany, which is responsible for enhanced cabins for the in-demand A321neo, the largest version of the planemaker's best-selling single-aisle family.

Airbus said it was looking at unspecified options to increase the share of the A321neo in the wider A320neo family.

"The second half of the year in terms of deliveries and in particular free cash flow continues to be challenging," chief executive Guillaume Faury said in a statement.

Airbus meanwhile continues to wind down its A380 superjumbo after deciding to scrap output due to weak demand. Air France-KLM on Tuesday announced plans to retire the world's largest jetliner to concentrate on smaller models like the A350, which Airbus said was on track to break even this year. 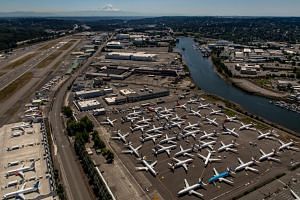