The mega offer tabled for Super Group last week is just the latest by a growing line of deep-pocketed buyers targeting home-grown companies and household brands on the stock market.

Dutch beverage giant Jacobs Douwe Egberts (JDE) is willing to spend $1.45 billion to acquire Super, a deal that looks like it will succeed.

Most market watchers have given their seal of approval, with DBS analysts Alfie Yeo and Andy Sim calling the $1.30-a-share offer "rich", even though the bid came as a surprise.

The depressed share prices across the market suggest more buyouts and privatisations are on the horizon, OCBC analyst Jodie Foo told The Straits Times. "With the current undemanding valuations for the broader market in Singapore, and with the price-to-earnings ratios being one of the lowest in the region and also at a low level versus the historical 10-year trend, we expect the privatisation and acquisition trend to continue," she said.

It all comes down to synergy and expectations. For example, businesses that rely on an outlet model may be less of a draw because their return on equity is probably lower.

MR NICHOLAS TEO, KGI Securities (Singapore) trading strategist, on which companies are likely to be acquired.

This is particularly the case in the food and beverage sector, where lacklustre expectations for earnings growth have put a lid on share prices. Ms Foo added that international buyers lacking a presence in this region would be keen on F&B companies with operations in key emerging Asian markets.

The F&B sector presents a range of potential targets, from bakery and restaurant operator BreadTalk to Japanese restaurant chain Sakae Holdings to Food Empire which is well known for its instant coffee products such as MacCoffee.

"The valuations of these companies are in the 20s and 30s (in price-to-earnings ratios), reasonable enough for strategic acquisitions even if the stock market does not appreciate their value," KGI Securities (Singapore) trading strategist Nicholas Teo said.

Companies with strong regional branding and distribution will be especially attractive to foreign buyers looking to establish a foothold, "similar to the dynamics between JDE and Super", Mr Teo added.

And with Super under the spotlight, Food Empire will likely draw some comparison.

Food Empire has a price-to-earnings ratio of 36.1 and a market capitalisation of about $162.5 million. It runs nine manufacturing plants in countries as far away as Ukraine, and exports its instant beverage and snack products to over 50 countries, with Russia its main market. 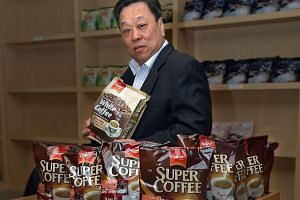 The company's biggest shareholder is Universal Integrated Corporation - or UIC - which owns a 24.79 per cent stake, while founder and chairman Tan Wang Cheow controls 9.84 per cent.

At BreadTalk, founder and chairman George Quek remains the captain of the ship with a 34.01 per cent stake. Under his management, BreadTalk has grown into the most recognisable bakery chain in Singapore, where it has about 120 outlets, with a further 392 in its key growth market, China.

The market capitalisation of BreadTalk - which also operates restaurants and food atriums - is around $282.7 million, with a 34.7 per cent price-to-earnings ratio.

But while some companies may look like a sweet deal on paper, guessing which one is getting acquired will be no more than "a jab in the dark", Mr Teo noted.

He added: "It all comes down to synergy and expectations. For example, businesses that rely on an outlet model may be less of a draw because their return on equity is probably lower."

Meanwhile, some market observers are concerned about the gradual loss of home-grown companies listed on the local exchange.

Singapore Business Federation chief executive Ho Meng Kit said: "While acquisitions and privatisations are the norm of a functioning market, it also suggests that companies are unable to seek growth and capital through our capital market."

National University of Singapore Business School associate professor Mak Yuen Teen noted the difference between acquisitions and privatisations where major shareholders opt out due to lack of liquidity or listing-rules compliance cost.

"The founders (of Super) did not let sentiments prevent them from doing what is best for the company and shareholders," he noted.

"If the board feels that someone else with the resources and the global scale can take the company further, then it should be prepared to let the company be acquired, provided the price is reasonable."