The Monetary Authority of Singapore (MAS) has confirmed that it has asked a number of banks to provide information on transactions and fund flows through the banking system here.

This is for its review of possible money-laundering offences related to Malaysian state investor 1Malaysia Development Berhad (1MDB).

"In response to media queries, MAS is able to confirm that as part of its investigation (into possible money laundering) and other offences in Singapore, it has been conducting a thorough review of various transactions as well as fund flows through our banking system," MAS told The Straits Times yesterday.

MAS has requested a number of financial institutions to furnish information relating to the review.

"Given the cross-border nature of these fund flows, MAS is also working closely with, and seeking clarifications from, relevant authorities in other financial centres... MAS will provide more details when we have completed our review," an MAS spokesman said. 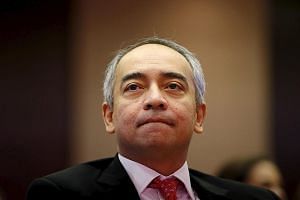 The regulator declined yesterday to confirm reports claiming that it had investigated some 40 banks with a presence in Singapore, including two of Australia's biggest banks, ANZ and NAB.

Both banks did not respond to queries by press time.

Transfers of as little as $50,000 are believed to be under scrutiny by MAS, which is investigating if funds from entities related to 1MDB were split into small amounts to escape notice, according to The Australian newspaper.

The paper said MAS is believed to have questioned the banks on why specific accounts were set up, the nature of the transactions, what internal processes they had in place to catch suspicious flows and why those processes did not work.

Meanwhile, Malaysian Prime Minister Najib Razak, who is reported by the Wall Street Journal to have received millions of dollars diverted from 1MDB, is said to have spent as much as US$15 million (S$20.2 million) on luxury items.

Last July, the paper reported that investigators had traced close to US$700 million of deposits moving through Falcon Bank in Singapore into Mr Najib's personal account.

Datuk Seri Najib has repeatedly denied wrongdoing and benefiting personally from any of the funds.

In January, he was cleared by Malaysian Attorney-General Mohamed Apandi Ali of criminal offences or corruption. The Attorney-General declared that the RM2.6 billion (S$904 million) found in the personal bank accounts of Mr Najib was a donation from the Saudi royal family.

In February, the Singapore authorities seized a "large number" of bank accounts over possible money-laundering and other offences linked to alleged financial mismanagement at 1MDB. The Commercial Affairs Department and MAS said at the time that they had been investigating possible offences since the middle of last year.