Our revamped Sunday Times Invest includes a new set of questions for Me & My Money, focusing on investment strategies and portfolios. This week, we talk to account manager Fiona Cher in the second of a four-part series on young people.

Given her online moniker, Budget Babe, it comes as no surprise that account manager Fiona Cher is always on the lookout for the best bargains. She trawls websites and apps for discounts, watches movies with her boyfriend online rather than go to the cinema, and cooks up a mean steak at home instead of heading out for meals.

Ms Cher, 25, writes about these experiences and other money-saving tips on her blog, which she set up in December last year to pursue her love for writing.

Some people have criticised her for being cheap, but she says: "There's a thin line between being frugal and cheap. That's how I work out the sums, in my own way."

She grew up solving money issues on her own as her family's financial situation was tough when she was younger. For instance, Ms Cher almost had to forgo university owing to a lack of funds, but she was determined to find a way out.

She recalls: "I told myself I'd try to get a scholarship. Before that, I tried borrowing from relatives or close friends, and to find a loan guarantor, but it didn't work out.

"I studied really hard for my A levels, and I got straight As for the scholarship. It's really funny, even my mathematics teacher and friends couldn't believe it, as I was never a straight-A student."

There's a thin line between being frugal and cheap. That's how I work out the sums, in my own way.

Ms Cher manages her finances so well that she saved $20,000 in her first year of being in the workforce.

She did it by spending less on expenses such as expensive coffee and at cafes, for instance, and supplemented her income by giving tuition. She tried to share her experiences online, but readers wrote into her blog, disparaging her efforts.

"I got a lot of hate mail. People said I could save a lot because guys could buy me drinks, and a lot of people tried to break down the figures and suggested I evaded income tax and was unfilial to my parents by not giving them money."

Ms Cher, who gives her parents $200 each a month, says that did not stop her from writing as more people gave her encouraging remarks, telling her the tips were useful. Her biggest tip for a young person hoping to do the same?

"Pay yourself a certain amount first. I've two separate accounts, one for saving, one for spending. I realised that when I saved a portion of my salary before spending, I saved a lot more."

A During the financial crisis in the late 1990s, my mum was retrenched so money was very tight. She worked very hard and sometimes had to borrow in order to feed my younger sister and I.

She never compromised even though money was tight, and that influenced my take on life.

My dad used to deal in forex and he lost money in the market. That influenced my mindset about the stock market a little bit, that I don't want to repeat the losses my dad had.

A From my blog readers. When my blog went viral, a lot of older folks were writing in to tell me I need to now look at investing because saving is not going to help me beat the inflation rate.

That's when I started to actively look at how to invest. I read books by Peter Lynch and The Little Book That Builds Wealth by Pat Dorsey, for instance, and I also discuss investing with some financial bloggers.

I'm now reading a book called The 30 Day MBA to understand how businesses work and function and how to do accounting.

A I'm not so much an income investor, more of growth and value. Right now I'm looking at value investing, trying to identify good companies with good fundamentals and also a bit of growth.

I try to really understand their business, look at the market sentiment of the stocks, and foresee their growth.

Q What do you invest in?

A I don't have a lot of stocks now, I'm still building up my war chest. I'm very wary of the brokerage fee, I don't want to just be making a few-hundred-dollar investment each time. After deducting the fees, it's not worth it, so I want to go in with a bigger position.

Now I've a few stocks - in logistics, and oil and gas. I've SingPost, for instance. I bought it because I believe e-commerce is going to grow, but the first question was who I should invest in.

I decided I wanted to look at a firm providing the back-end, and as someone who uses SingPost, I really see a huge increase in volumes.

The only thing I'm concerned about is that they've been making a lot of investments and acquisitions in recent years, and it remains to be seen whether those will be worth it.

I also invest in myself, be it through clothes or books. I have just bought a pair of professional black heels, which I think is important for my image, and I'm trying to read a lot more now.

Q What does money mean to you?

A I spend only when I see the utility value or cost of an item; it's similar to marginal utility in economics.

For instance, the utility value of taxis is not very high unless you are really late.

I think clothes have very little utility value so I don't splurge on them. I prefer to spend $20 on a good pair of pants that I'll keep wearing, than expensive pieces that I won't wear after one or two years.

I usually try to apply this judgment before I make a purchase.

Q What's the most extravagant thing you have done?

A I saved up, borrowed and spent $16,000 on my overseas exchange in the United States that taught me independence and even more saving tricks, like couponing.

Q What is your biggest investment regret?

A I missed buying Comfort DelGro shares previously because I was so angry over the taxi service. But in hindsight, I realised that if I'd put my money there instead of my logistics stock, I would have gotten a 10 per cent return in two months.

But it's OK, because that's short term.

I bought an investment-linked plan two years ago, when I was naive and just started working. I'm terminating it this year. I figure if I'm paying someone so much money to manage my investment, I'd rather do it myself. 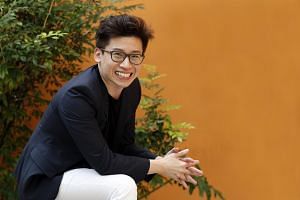 Win-win way to get rich: Help others make money

Q What are your immediate investment plans?

A I started an organic skincare business called Blended which launched four months ago.

I've been working on organic skincare on my own for a long time, for myself. I'd create my own cleanser and skincare products.

There's a lot of trial and error with ingredients. One of my all-time favourite masks is made with natural yogurt and a few drops of lemon. Chill it in the fridge and apply it. I love these kinds of home-made remedies.

Recently, I started looking at proper research and product testing, so, together with a business partner, I'm working on making good recipes and testing them out to make sure they don't spoil, for instance.

I read a book that mentioned how nobody in Wall Street or Forbes got rich by investing; the top few got rich by doing business.

Hopefully this will be one of my sources of passive income.

Q In the longer term, how are you planning for retirement?

A Nothing specific at the moment, but I want to have enough passive income from my investments.

A An executive Housing Board flat in Ang Mo Kio.