It is a world-famous shopping precinct, a tree-lined retail haven that has attracted locals and tourists for decades. But there are concerns that a slowing economy is taking the shine off Orchard Road. However, the shopping super-strip can still stay streets ahead. Rennie Whang and Rachael Boon take a closer look at the movers and shakers who own a piece of Orchard Road and how they are doing their bit to rejuvenate this prime shopping belt.

If there is one commodity you can find easily at Orchard Road these days, it's the doldrums. Anywhere you look, someone is peddling a downbeat message.

The latest came from property consultancy Cushman and Wakefield, which reported that rents of prime retail space have fallen to a four-year low in Singapore's premier shopping strip.

Then there are the lacklustre economy that is keeping spending in check, the rise of suburban malls and online shopping and fewer tourist arrivals.

Add in reports that long-time retailer Metro was disappointed with the level of sales rung up after moving to The Centrepoint, or that the newest mall, orchardgateway, lacks shoppers, and it's hard not to get the impression of an Oscar-winning actress past her prime.

But take all these portents of doom with a pinch of salt. Orchard Road has been a shopping haven since the 1960s and it isn't going to lose its crown without a fight. 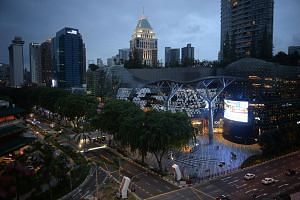 Still the street with the richest pickings 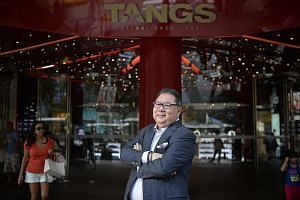 Graveyards made way for shopping belt 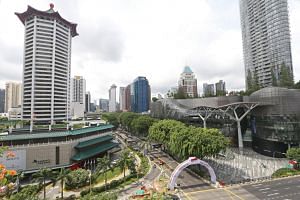 An interactive guide: Who owns a piece of Orchard Road

ANYONE WHO IS SOMEONE IS HERE

Take a stroll along Orchard Road and the Singapore business scene unfolds in front of you. Old money, new kids on the block, Singapore corporates and foreign players are all present. Regional diplomacy is on show with the sprawling Thai Embassy offering a stretch of greenery and calm.

Take a short detour along Scotts Road, where the Sultan of Brunei lends a royal touch with his Grand Hyatt Singapore hotel. Shaw House and Shaw Centre, built by entertainment moguls the Shaw Brothers, represent the presence of old money.

Take a stroll along Orchard Road and the Singapore business scene unfolds in front of you. Old money, new kids on the block, Singapore corporates and foreign players are all present. Regional diplomacy is on show with the sprawling Thai Embassy offering a stretch of greenery and calm.

The portfolio of some of the biggest firms in Singapore is on show here, including City Developments. Far East Organization, whose founder Ng Teng Fong earned the moniker "King of Orchard Road" for developing eight malls in the stretch - it has recently added a ninth - still stands tall. It owns Orchard Central, large chunks of Orchard Towers and Far East Shopping Centre, among other jewels.

Tycoon Ong Beng Seng speaks for the rest of this stretch with HPL House, Forum The Shopping Mall, and the Hilton Singapore and Four Seasons hotels.

Ion Orchard, developed by CapitaLand in a joint venture, adds a wealth of glitzy charm with its unusual facade and duplex flagship stores of top designers.

Singapore Press Holdings' Paragon and its expensive shops help give the shopping belt an air of exclusivity. Frasers Centrepoint owns The Centrepoint while OCBC Bank owns orchardgateway. Australia's Lend Lease has made its foray into Orchard Road with 313@somerset.

But imposing Ngee Ann City, owned by the Ngee Ann Kongsi, with its Civic Plaza the centre of any action, continues to dominate Orchard Road.

International brands still continue to make Orchard Road their first port of call when they come to South-east Asia. Swedish fast-fashion retailer H&M and American casual wear brand Abercrombie & Fitch opened mega-stores in the vicinity to much fanfare in 2011.

French-Italian apparel and lifestyle brand Moncler will launch its first South-east Asia stand-alone boutique, slated to be completed by the end of this year, in Ion Orchard.

Shopping in Orchard Road remains an experience that can't be found elsewhere. Dr Lee Nai Jia, DTZ research head, said the street has constantly been reinventing itself. He and various industry players cite events such as annual fashion extravaganza Fashion Steps Out and Pedestrian Night. Both are initiatives by the Orchard Road Business Association (Orba) and the Singapore Tourism Board.

Mr Mark Shaw, Shaw Organi- sation's executive vice-president and Orba chairman, said: "It's a day out. Even if you live next to Jurong Gateway, or Nex in Serangoon, the pedestrian street experience differentiates Orchard Road. You can walk the entire length and pop into any shop you choose. It's not just a single mall in the suburbs."

Malls owners are kept on their toes with the new competition.

"Six years after Mandarin Gallery was launched, we have to go about updating our tenancy mix to ensure that the mall remains relevant," said Dr Stephen Riady, executive chairman of OUE, which holds Mandarin Orchard Singapore and Mandarin Gallery through OUE Hospitality Trust. Mandarin Gallery had a $200 million facelift and opened in January 2010 with high-end shopping in mind. Dr Riady said the mall has a part to play in upkeeping Orchard Road's reputation of a "world-class shopping street".

Certainly, the retail sector is risky to begin with, said Knight Frank Singapore executive chairman Tan Tiong Cheng. "Every five to seven years, you need to do some repositioning and strategic thinking."

Shaw Centre and Shaw House completed their revamp in November, while Tangs started a $45 million revamp of its store in 2012.

REJUVENATION IS THE NAME OF THE GAME

Now that the area around the Somerset station is up and running, the action is moving elsewhere.

Nearby, the new 268 Orchard Road, formerly the Yen San Building, is being connected to The Heeren via basement and overhead walkways. These will put Orchard Road on a par with other inter-connected shopping havens like Hong Kong.

Further along the stretch, Hong Fok Corporation, which owns International Building, is redeveloping the adjoining carpark and the land parcel between the Thai Embassy and International Building, which it also owns. The carpark site - which drivers can see as they exit the Shaw Centre carpark - is being developed into a 30-storey, 610-room hotel to be operated by British brand Yotel.

This stretch of the Orchard Road shopping belt, from Far East Shopping Centre to Tanglin Mall, has seen little change in the past decade or so, with the exception of luxury hotel St Regis Singapore, which opened in December 2007.

Mr Kwek Leng Beng, whose City Developments and Hong Leong Group own several properties here, called for a more cohesive approach for the entire belt, for the Orchard Road precinct to retain its lustre.

Orchard Road enjoyed a big lift when the Orchard and Somerset MRT stations were built and Mr Kwek is confident the same will happen when the upcoming Orchard Boulevard MRT station on the new Thomson Line, near Camden Medical Centre, is completed, probably by the end of 2021.

Mr Shaw still believes in the Orchard Road experience. He said: "Between all the buildings, there are plenty of offerings... When I go out for lunch, I regularly walk from Shaw Centre to pretty much anywhere; it's great. These are the strengths of Orchard Road."

An interactive guide: Who owns a piece of Orchard Road

You can also check out our online interactive graphic for more details about each building.

A version of this article appeared in the print edition of The Straits Times on July 15, 2015, with the headline 'Bringing back the buzz'. Subscribe
Topics:
More
Whatsapp Linkedin FB Messenger Telegram Reddit WeChat Pinterest Print Purchase Article Copy permalink