It is an all-time high for the cryptocurrency, which is not backed by any central bank or government.

And it marks a tenfold increase in worth this year.

In some individual countries such as South Korea, the exchange rate is even higher.

Bitcoin's fans are likely to see the new milestone as a vindication, riding off announcements that two mainstream American financial exchanges, CME Group and the Chicago Board Options Exchange, have plans to pick it up.

But it is not likely to win over many critics who say this boom is fueled by pure speculation: A bubble similar to the dot.com collapse at the turn of the millennium. 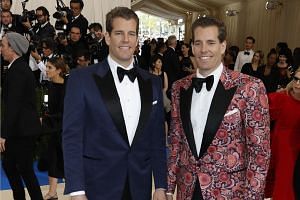 This includes big institutions like Credit Suisse and JPMorgan.

Bitcoin is also highly volatile and its worth partly tied to Google searches for it. The more people are searching for it, the higher it goes.

There is also concern that Bitcoin's almost complete lack of regulation could have side effects on normal currencies, undermining policies designed to control inflation.