In a statement late last night, MAS said the website's article is "highly deceptive and misleading".

"The statements attributed to DPM Tharman are completely false, apart from his observation that trading volumes in cryptocurrency are low in Singapore," it said.

In a screenshot of the website accompanying the MAS statement, a headline for an article reads: "Tharman Shanmugaratnam Invests $1 Billion for All Singapore Residents. Use HIS Method To Become Rich In Just 7 Days!"

The article also describes him as a "venture capitalist" who announced that Singapore is stepping into the bitcoin cryptocurrency market. The site asks readers to sign up for a bitcoin account and also requests their credit card or bank account details.

MAS advised the public to exercise "extreme caution" and avoid providing any financial or personal information on the forms linked from the website.

"Putting money in cryptocurrencies such as bitcoins is highly risky," it added. 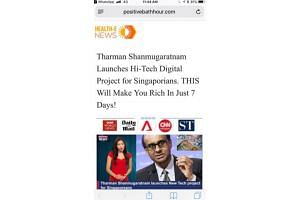 In an advisory last Dec 19, MAS had warned the public of the risks of cryptocurrency investments.

DPM Tharman, who is also MAS chairman, said in a reply to a parliamentary question on Feb 5 this year that Singaporeans "could lose their shirts when they invest money in cryptocurrencies".

Members of the public who suspect that an investment could be fraudulent or misused for other unlawful activities should report such cases to the police, said MAS.