SINGAPORE - The prosecution will call nine witnesses in its case against former BSI banker Yeo Jiawei - the first person to be tried for the key role he allegedly played in a massive money laundering operation linked to scandal-hit 1Malaysia Development Bhd (1MDB) fund.

Deputy Public Prosecutor Tan Kiat Pheng, in his opening statement on Monday (Oct 31) to a packed court room, called the trial the "most complex, sophisticated and largest money laundering case handled by the CAD (Commercial Affairs Division)", involving the movement of "staggering amounts of moneys across jurisdictions over the course of several years".

Yeo, 33, is accused of facilitating illicit transactions involving 1MDB that led to the shutdown of Swiss private bank BSI's operations here. He faces a total of 11 charges ranging from money laundering and cheating to forgery and obstruction of justice.

The prosecution said on Monday it will be proceeding on four charges relating to Yeo's attempts to pervert the course of justice. It will apply for the remaining seven charges, which concern cheating, money laundering and forgery, to be stood down. 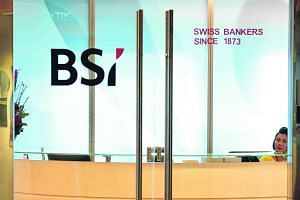 Ex-BSI banker Yeo Jiawei granted bail of $600,000 but will stay in remand until June 1

District Judge Ng Peng Hong is presiding over the trial, which is set to run until Nov 11, with a break on Nov 4. Mr Philip Fong of the law firm of Harry Elias is representing Yeo.

According to the prosecution's opening statement, Yeo, who was employed as BSI's wealth planner between December 2009 and July 2014, amassed wealth of about S$26 million from various sources, including illicit schemes to defraud BSI while he was a BSI employee and others whom he dealt with after he left BSI.

During and after his employment at BSI, Yeo played a central role in facilitating or concealing the laundering of large sums of money, according to DPP Tan.

Both Yeo and Kevin Swampillai, BSI's head of wealth management services and Yeo's supervisor, were involved in transactions in which certain fees would be shared between BSI, a fund manager and Samuel Goh Sze-Wei, who was an associate of Yeo's.

Unknown to BSI, Yeo arranged for Bridgerock Investment and GTB Investment, which were beneficially owned by Yeo and Swampillai respectively, to receive a significant portion of the fees for their own benefit.

Bridgeock and GTB were the subject of investigations by CAD in March this year.

A day later, on March 18, Yeo was released on police bail. Under the terms of the release, Yeo was obliged to comply with conditions, including to not commit any offence while released on bail; and to not interfere with any witness.

According to DPP Tan, unknown to CAD in the days following his release, Yeo proceeded to take active steps to pervert the course of justice.

"In a display of complete and wanton disregard for the law and CAD's investigations, he met and contacted key witnesses in the hope of suppressing incriminatory evidence pertaining to his own illicit schemes and activities," DPP Tan said.

On March 27, 2016, after his release on police bail, Yeo arranged for Swampillai, Goh and himself to have a meeting at at the Pergola Cafe in the Swiss Club at 36 Swiss Club Road.

The prosecution will lead evidence that, at the cafe, Yeo, Goh and Swampillai discussed the CAD investigations, including that of Bridgerock and GTB, DPP Tan said. In the course of the meeting, Yeo told them to lie to the CAD that the funds transferred by Goh to Bridgerock and GTB were Goh's investments.

After he left BSI, Yeo continued to be involved in illicit transactions and other transactions connected in the money laundering case. Some of these transactions were conducted through the Amicorp Group, which provides legal and corporate secretarial support services.

In March, Yeo was interviewed by CAD on transactions involving Amicorp. As Jose Renato Carvalho Pinto and Mun Enci Aloysius were Amicorp employees who received instructions from Yeo in relation to these transactions, Yeo was worried that CAD would interview them.

The prosecution will lead evidence that, sometime in March 2016, Yeo contacted Mr Carvalho using the "Telegram" text message application, said DPP Tan. In his messages, Yeo told Mr Carvalho to dispose of his Amicorp laptop, which would likely contain evidence of Yeo's dealings with Amicorp. Yeo also told Mr Carvalho not to travel to Singapore, to avoid being interviewed by CAD.

The prosecution will lead evidence that in March this year, Yeo also used the "Telegram" text message application to instruct Mr Carvalho to tell Mr Aloysius to inform CAD that he did not know of Yeo's dealings with Amicorp if he was to be questioned by CAD.

Mr Kelvin Ang, said to be a broker with Maybank Kim Eng, has also been charged. He is alleged to have paid a research analyst to produce a favourable valuation report on certain 1MDB assets. Ang's pre-trial conference will be held on Nov 17.