Tech spend has risen, but it won't go for Internet bank licence in HK

But the bank will not create digital banks, nor apply for an Internet bank licence in Hong Kong, said Mr Tsien following the release of its third-quarter results.

He noted that OCBC does not believe in focusing on digital banking but in digital transformation throughout the bank - remarks seen by some as a slight dig at his competitors.

DBS has digibanks in India and Indonesia, while United Overseas Bank (UOB) said in August it plans to launch a digibank for Asean clients.

OCBC feels it does not need a separate digital bank to look for new customers. "We also do not think it's the right approach," Mr Tsien said.

He also noted that it is not applying for an Internet bank licence in Hong Kong, a stance also taken by UOB and DBS.

OCBC has been spending more on technology over the past five years as it pushes towards digital transformation, he added. 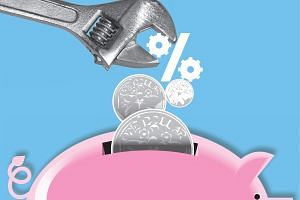 Technology spend, excluding IT staff costs, has risen steadily to 11.3 per cent of total costs. It hit $330 million in the first nine months this year, against $430 million for the whole of last year.

This could go to 12 to 12.2 per cent next year, where it could be "half a billion dollars or more, it is most likely", Mr Tsien said.

OCBC is also committed to spending $20 million on educating its staff on their digital knowledge.

"We're educating them, we're encouraging them...not just from a work perspective... but also from social and personal perspectives...," he said.

"We think digital as a technology should be employed throughout the bank, and not just focusing on interaction with the market, or with the customers.

Since 2012, OCBC has cut its Singapore branch network from 49 to 42. It has also reduced networks in Hong Kong, China and Indonesia, but it has increased branch numbers in Malaysia.

Excluding ATM withdrawals, 87 per cent of financial transactions and 70 per cent of international remittances are now done on the digital channels, he added.

Previously there was quite a lot of manual processing for remittances, including customers having to line up at a counter to fill in forms, he noted, adding: "So it has been helping us on the cost side, quite a bit."

A version of this article appeared in the print edition of The Straits Times on November 02, 2018, with the headline 'No digibanks as OCBC opts for digital transformation'. Subscribe
Topics:
More
Whatsapp Linkedin FB Messenger Telegram Reddit WeChat Pinterest Print Copy permalink