If someone were to cut the queue for the cashier at the supermarket, what would you do?

Answers to psychometric questions such as this will help moneylender Minterest predict a borrower's behaviour, assess the risk in offering him or her a loan without collateral - and maybe even slash the interest rate by half.

The firm is one of six which will be issued new moneylending licences next year to pilot their own unique business models, the Ministry of Law (MinLaw) said yesterday.

It is the first time that MinLaw has issued new moneylending licences since a moratorium was imposed in 2012.

The one-time lifting of the moratorium is part of an initiative to better protect borrowers through business-led improvements. The new models include more comprehensive use of data to assess creditworthiness, using digitalised processes to lower cost and giving better terms to those who repay their loans early or on time, MinLaw said.

Credit 21, Dey and Quick Credit will be issued licences to operate up to four outlets each.

IFS Capital, Xingang Investment and Minterest will be allowed to operate one outlet each. 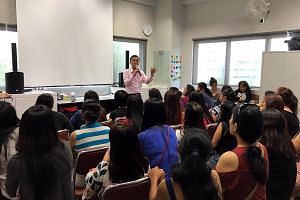 Mr Ronnie Chia, chief operating officer of Minterest, said that his firm will be asking psychometric questions to gauge creditworthiness as part of its business model.

Borrowers who obtain a good credit score could see their interest rate cut by half.

"We do not want to be the traditional moneylender where people may go to as a last resort," he said. "We want to be a true alternative to financial institutions. Using technology and data to assess credit risk, we want to create dynamic pricing and pricing that is applicable to the individual."

With mobile applications changing the face of moneylending, a "safe, secure and seamless experience" could be provided, where people key in minimal information, such as their names and NRIC numbers, and firms access their data through a government site such as MyInfo, said Mr Chia.

He added that borrowers could log in to Minterest's planned mobile app using their Facebook accounts to find out how much they can borrow and the rate of interest.

Entrepreneurs and freelancers who have volatile incomes and may not be able to secure a loan under traditional methods of assessment can still get a loan under the new business model, which will assess their ability to repay the loans based on the business contracts they have secured, said Mr Sim.

MinLaw said that there are currently 162 moneylending outlets in Singapore. The new licensees will be allowed to operate for up to two years from next year, after which the ministry will evaluate the results of the pilot and consider options for refining the moneylending regulatory regime.