HONG KONG (REUTERS) - The launch of new online-only banks in Hong Kong is expected to be delayed in part due to anti-government protests in the city, people with direct knowledge of the matter said.

Most of the eight newly licensed digital banks in Hong Kong, including joint ventures involving Standard Chartered and Bank of China Hong Kong, had aimed to begin operating before the end of 2019.

But as protests stretch into a fourth month, the new banks, seen triggering the biggest shake-up to Hong Kong's retail banking sector in years, will now launch early in 2020, the people told Reuters.

A delay would be the latest sign of the damage being wrought on the Asian financial hub's economy due to the political turmoil that erupted in June.

Some of these so-called virtual banks had aimed to launch brand promotion campaigns as early as this month, but these plans have now been put off, the people said, on condition of anonymity give the sensitivity of the matter.

"This form of banking service is mainly aimed at the youth, millennials, and many of them are out on the street these days joining the protests," a senior executive at a licence winner said.

"It will be difficult to launch a brand campaign around them and attract their interest when their priority is clearly not having another bank account," said the executive, declining to be named as he was not authorised to talk to media.

More than 100 days of sometimes violent protests were sparked by a bill that would have drawn the semi- autonomous Chinese territory closer to the mainland Chinese legal system. The bill was withdrawn earlier this month, but the protests have since broadened into calls for universal suffrage. 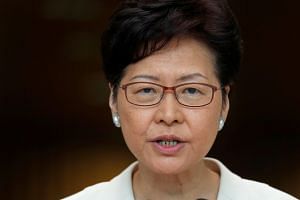 Explainer: How important is Hong Kong to the rest of China?

The banks intended to launch services in six-to-nine months, the Hong Kong Monetary Authority (HKMA) said at that time.

Five more licences were issued later to joint ventures led by smartphone maker Xiaomi and Tencent, and a unit of Ant Financial among others.

HKMA said starting six-to-nine months after authorisation was "not a rigid requirement", but services were expected to be rolled out to the public in the fourth quarter at the earliest based on the virtual banks' latest indications.

A spokeswoman for the Xiaomi-led joint venture said the virtual banking business was in the preparation stage, while Ant said that work for its bank was progressing smoothly. Tencent led-Fusion bank did not respond to a request for comment.

A couple of the licence winners could still 'soft launch' in 2019, restricting services to staff and their families ahead of a full launch, the people said.

The launch delay is also partly due to the time required to build technology infrastructure, compliance and customer acquisition processes, and hire staff, the people said.

"This is about building a new bank from ground zero, with regulatory standards that are similar to traditional banks," one person said.