SINGAPORE - The ongoing implementation of cashless payment systems across Singapore could lift local bank profits by up to 9 per cent over the next two years, according to Maybank Kim Eng Research.

Its analyst Ng Li Hiang said in a research report on Tuesday (Sept 19) that the higher adoption of cashless payments would increase credit card usage, which would potentially benefit bank revenue.

If 40 to 70 per cent of expenditure in Singapore shifts from cash to cashless payment, this could raise banks profits by 3 to 9 per cent between this year and 2019, she said.

"Most payment platforms adopted by retailers are currently linked to consumers' cards and/or bank accounts. Based on Euromonitor data, local banks had a combined 66 per cent share of card payment transactions in 2016," she noted.

"Our channel checks suggest that the bulk of banks' card fees come from merchant discount rates and net interchange fees."

A merchant discount rate is the rate charged to a merchant by a bank for providing debit and credit card services, while interchange fees are are transaction fees that the merchant's bank account must pay whenever a customer uses a credit or debit card to make a purchase at their store.

"If we assume 70 to 90 per cent of banks' card fees in Singapore are related to such fees, we estimate Singapore banks earned between S$77 million and S$388 million in 2016 (from these fees)," Ms Ng said.

This would reflect a profit margin of between 0.6 and 1.5 per cent.

And if 40 to 70 per cent of Singapore's total expenditure were to shift from cash to cashless payments, that would translate to between S$70 billion and S$123 billion worth of transactions moving from paper to plastic.

"We estimate the potential increase in card fees to be around S$421 million to S$1.96 billion, with Singapore banks to generate profits of S$60 to S$600 million (from these fees)," Ms Ng added.

Assuming a profit margin of 1.2 per cent, the local lenders' net profits could increase by an estimated 3 to 9 per cent, she said.

However, Ms Ng noted that her analysis was based on certain assumptions that could pan out very differently. 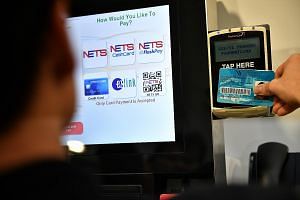 For starters, the amount of customer spending that would shift to cashless payments over the next few years might not reach the 40 to 70 per cent assumed for the analysis.

She also noted that the scenario assumes these future cashless payments would be made by cards.

"This paper only look at cards' fees but potential disruption in the payments space can have wider negative implications to banks. We do not know the shape and form of payment disruptions from emerging fintech/e-commerce competitors," she noted.

In fact, she added: "Banks' card revenues may shrink should there be mass adoption of cashless payments through bank transfers or banking accounts, which usually do not incur additional charges for merchants and consumers."