The Bank for International Settlements (BIS) will set up an innovation centre in Singapore, in a move that the Monetary Authority of Singapore (MAS) said reflects the Republic's position as a leading fintech centre.

Similar centres will first be set up in Basel, in Switzerland, and Hong Kong - under the umbrella of the organisation's BIS Innovation Hub - to identify and develop insights into critical trends in technology affecting central banking, said BIS yesterday.

The hub will also develop public goods in the technology space, geared towards improving the functioning of the global financial system, and serve as a focal point for a network of central bank experts on innovation.

The move is the latest in recent fintech developments here.

Global professional services firm EY reported last week that the fintech adoption rate among Singapore consumers jumped from 23 per cent to 67 per cent in just the last two years, higher than the global average of 64 per cent. 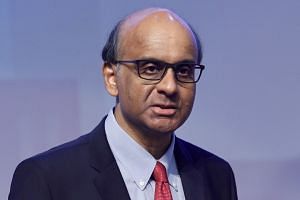 Fintech in Singapore: The future of our money

Why fintech companies are drawn to Singapore

Noting that the IT revolution has no borders, BIS' board of directors chairman Jens Weidmann said the innovation hub will enable central banks to extend existing collaboration with a view to identifying relevant trends in technology and keeping abreast of regulatory requirements, with the aim of safeguarding financial stability.

Mr Mark Carney, chair of BIS' economic consultative committee, added: "There is a new economy emerging, driven by changes in technology, demographics and the environment.

"While the private sector is driving these innovations, their efforts will be more effective if the hard and soft infrastructure of the global financial system support this innovation, promote resilience and level the playing field on which to compete."

MAS said the centre to open here "reflects Singapore's position as a leading international fintech centre", with an advanced ecosystem.

"To fully harness the benefits of these innovations while ensuring the resilience of the financial sector, central banks must also innovate - to modernise the technology infrastructure and regulatory arrangements that underpin digital finance and the digital economy," he said.

"The BIS Innovation Hub initiative provides a compelling platform for central banks to collaborate in this effort, so as to maximise the benefits of cross-border digital connectivity and commerce."

BIS, which works to promote global monetary and financial stability through international cooperation, said more centres under its innovation hub will be added across the Americas and Europe in the second phase of implementation.

The International Monetary Fund, for example, recently released a report saying that its research showed countries generally foresee the emergence of crypto assets backed by central banks, he added.

"BIS recognises that, and that's why it chose Singapore as one of its bases to have an innovation hub centre," he said, adding that the Republic has been at the forefront when it comes to exploring the use of central bank digital currencies.

He added that apart from allowing a greater transfer of knowledge into Singapore, developments such as BIS opening an innovation centre here also open doors for more research and development in fintech here, and opportunities to export Singapore's fintech services.