Singapore's banking sector is entering a new phase with up to five new digital bank licences set to be issued to players that can add value to its economy, even if they have no track record in banking.

These licences will be issued in addition to any digital banks that the local banking groups may establish under the existing Internet banking framework. The move will extend digital bank licences to non-bank players, including technology and e-commerce businesses.

The Monetary Authority of Singapore (MAS) expects to invite applications for the licences in August, and will provide more details on the eligibility and admission criteria at the time. The Straits Times understands that several foreign and local companies have made inquiries.

MAS plans to issue up to two digital full bank licences, under which a wide range of financial services can be provided and deposits taken from retail customers. These are meant for companies headquartered in Singapore and controlled by Singaporeans. Foreign companies are eligible if they form a joint venture with a local company.

Up to three digital wholesale bank licences, which allow licensees to serve small and medium-sized enterprises and other non-retail segments, will also be issued. These are open to local and foreign players. They will be issued as a pilot, and MAS will review whether to grant more such licences in the future.

"We are starting with two digital full bank licences so as not to fragment Singapore's small domestic retail banking market. We are also restricting the new licences to players anchored in Singapore for two reasons. 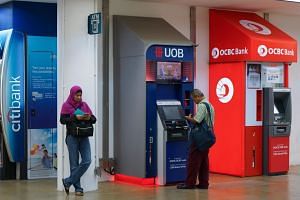 Singtel, Grab and Razer to study feasibility of applying for digital banking licence

Why I would welcome virtual banks

With virtual banks, safeguards a must

"First, so that we maintain a strong local core in our banking system. Second, to avoid an unintended unilateral liberalisation of our full bank regime as a result of our WTO (World Trade Organisation) commitments," said Mr Tharman, speaking at the annual dinner of the Association of Banks in Singapore.

Digital banks have the potential to reduce costs in the delivery of financial services, and to offer better rates, lower fees as well as easier-to-use services to consumers. They can cater to under-served segments, analysts said.

"MAS will not allow value-destructive competition to the detriment of long-term financial system stability. We will also put in place safeguards to protect depositors, mitigate the risk of untested business models and minimise costs to the financial system in the event of a failure. We will also ensure that digital banks will compete with incumbents on a level playing field," Mr Tharman said.

When the restricted digital bank first commences operations, it will be subject to an initial deposit cap of $50 million, an individual depositor cap of $75,000, and generally be allowed to accept deposits from only a small group of depositors such as business partners, staff, related parties and selected customers.

"We are in fact at the threshold of a further and more fundamental transformation in banking," he said.

Digitalisation has prompted a fundamental rethink in the role of the banks. The idea is to use technology to serve customers better, while retaining strong local anchors and trust in the banking system, said Mr Tharman.