ZURICH (BLOOMBERG) - Credit Suisse Group brushed off the gloom in European bank earnings as wealthy clients added new money and revenue from securities trading rose in a quarter in which peers posted declines.

Six months after emerging from Thiam's painful turnaround, an industrywide slump in trading and the prospect of lower interest rates for longer are testing Credit Suisse's new business model. The CEO has pivoted the bank away from volatile investment banking and more toward wealth management, particularly in Asia, where most of the world's millionaires are created.

"It's been a good quarter for us," Thiam said in an interview. The environment "is very difficult, every quarter has been really mixed."

Shares of Credit Suisse rose 2.8 per cent at 9:20am in Zurich, bringing gains this year to 11 per cent.

Thiam has held off on drastic job cuts announced this year by competitors including Deutsche Bank and Societe Generale. Credit Suisse said it saw "healthy levels of client engagement" so far this quarter, contrasting with warnings from peers that clients were staying on the sidelines and lower rates would hurt income from lending. Thiam had earlier forecast that he was "cautiously optimistic" on the three-months through June.

"Negative interest rates are a challenge," Thiam said in the interview with Bloomberg TV's Francine Lacqua. Credit Suisse will announce some measures in August to change pricing and protect income from lending, he said. 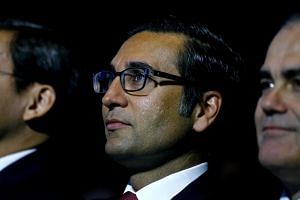 Credit Suisse to penalise its Asia bankers who quit

Like rival UBS Group, Thiam's bank has to pay the Swiss National Bank to park excess cash at home, but it's less affected than its larger neighbor by the reversal in US interest rates expectations, after exiting its US private banking operations in 2015.

The two bank have been exploring options to share back office costs, people familiar with the matter said last year. Thiam confirmed those discussions on Wednesday, saying they continue and make good progress.

UBS relied on cost cuts and rising income from advising clients on deals and stock issuance to compensate for earnings disappointment at its most important private banking business, which contended with wealthy clients in the US withdrawing funds to pay tax bills, resulting in net outflows of US$1.7 billion.

Credit Suisse earlier in July lost the head of its international wealth management unit Iqbal Khan, who was seen as a potential successor to the CEO. Thiam said in the interview he was wishing Khan well and that the bank had found a very good successor in Philipp Wehle, the unit's former finance chief.

Competition for the best private bankers has been increasing as numerous lenders follow the lead of UBS in building up their wealth management. Deutsche Bank hired a team of around a dozen private bankers from Credit Suisse earlier in July. The German lender offered some bankers pay increases of up to 40 per cent, according to people familiar with the matter.