LONDON (REUTERS) - For Deutsche Bank chief executive Christian Sewing, shrinking the group's investment bank will be the relatively easy - if expensive - part of his restructuring plan.

Finding steady revenue streams to produce the 7.4 billion euros (S$11.3 billion) the bank expects in charges from cutting down its trading arm will be more challenging.

Deutsche Bank wants corporate banking to be the centre of its business.

This involves building on its strengths in transaction banking - such as trade finance and cash management.

The bank is held up by rivals as a traditionally strong performer in these areas, but its standing has slipped recently with the lender dipping from 5th to 6th last year in the global league tables for transaction banking compiled by banking analytics firm Coalition.

Transaction banking, one of the less glamorous areas of finance, is a growing focus at several of Deutsche's rivals, as it requires less capital and is not as cyclical as investment banking.

Goldman Sachs for example is looking to launch a cash management business next year while HSBC and Standard Chartered are trying to build on their strong Asian franchises by beefing up their European operations.

In investment banking Deutsche has said it wants to retain a focus on advising on M&A deals and on helping to list companies and issue bonds. The bank remains a major player in this space, but trails U.S. rivals, while some European competitors are gaining some market share.

In Refinitiv's investment banking scorecard, which tracks how firms do on advising on M&A, equity and debt capital markets, loans and leveraged finance, Deutsche currently ranks 8th so far this year globally - steady compared with 2018. In Europe, it has slipped to 8th from 7th a year ago, with BNP Paribas edging above it.

In asset management, Deutsche Bank's DWS arm is seen as another of its strong points, and one the bank leaned on to extract value last year when it listed 22.5 per cent of the business. 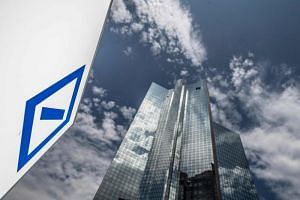 But with the sweeping rise of passive investments, asset managers need scale and technology to compete. Deutsche had held talks with rival UBS earlier this year about a merger of their asset management arms, but talks broke down due to a clash over who would ultimately control the business.

In private banking, Deutsche has said it plans to hire 300 new relationship and investment managers by 2021 as part of a plan to bulk up in the sector.

But the bank will be tracing a path already beaten by several of its rivals, and it will need to find a strong niche if it is to make much headway.

A broader challenge for Deutsche is technology, with the lender trying to update legacy IT systems that are blamed in part for the bank's failure to control costs while also keeping up with the wave of fintech innovation in the industry.

Deutsche has established a board-level Technology, Data and Innovation Committee to tackle this, and in a memo to staff on Sunday Sewing said Deutsche Bank would invest 13 billion euros in technology by 2022.

That should help, but it will be doing so amid a technology arms race in banking.

Research from UBS earlier this year found that JPMorgan has budgeted US$11.4 billion for technology in 2019 alone.