Three competing pharmaceutical giants joined forces with local universities and the Agency for Science, Technology and Research (A*Star) yesterday in a programme to improve their manufacturing operations, which would eventually drive down drug costs for patients.

For example, pharmaceutical firms have been making active pharmaceutical ingredients batch by batch, a process that has been around for a century, said GlaxoSmithKline vice-president and pharmaceutical supply chain site director Lim Hock Heng.

"This is capital-intensive and not very efficient," Mr Lim said, adding that the flow of production is interrupted between each batch.

One area that the programme is looking at is to convert this into a continuous process, resembling an assembly line. This involves a high degree of automation in order to process materials without any interruption.

Asked about the rationale for grouping large pharma companies together, A*Star adviser Maureen O'Shea, who is leading the programme's implementation, told The Straits Times that many companies have been trying to develop these technologies on their own, which is a costly process.

"Pharma companies are coming to a point where they realise that they don't compete on technologies, they compete on medicines," said Ms O'Shea. 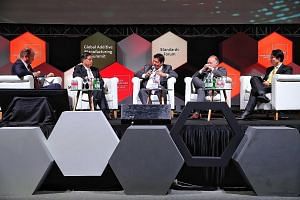 "The (manufacturing) technologies are something they share with each other, and they realise by bringing together the core leaders of the industry, they can build on that opportunity.

"Beyond that, they can also build on the local institutes of higher learning community and A*Star, and tap the wealth of science beyond the pharma sector."

The pharmaceutical manufacturing industry in Singapore has grown by more than three times since 2000, and currently employs more than 7,000 people in 30 factories here.

Eight of the top 10 pharmaceutical companies own facilities here, while four of the top 10 drugs used in the world are made in Singapore.

In recent years, however, the industry has come under sustained pressures on drug pricing and growing competition from emerging markets, A*Star said in a fact sheet issued to the media.