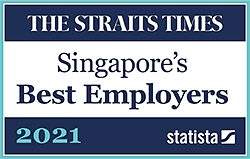 Every company employing at least 200 people in Singapore was considered for this ranking. Statista, the research partner of The Straits Times, found more than 1,700 of such companies.

In order to facilitate evaluations about them in an independent environment, Statista organised online panels. Through such panels, more than 6,000 employees working for eligible companies could be identified.

Employees also had the opportunity to evaluate other employers they could reasonably claim to have an opinion on, such as companies in their respective industries, companies where their close relatives work or their former employers (“indirect evaluations”).

For the purpose of further analysis and editorial input, employees were asked their opinion of their own employer. They were given about 30 questions on a range of topics – from salary and work-life balance to potential for development, their work environment and the reputation of their employer.

During the field phase of the research project (from early August to early October 2020), eligible employees were also invited via The Straits Times website to participate and thousands completed the online survey form.

In total, more than 200,000 evaluations were collected.

Employers were ranked by their total score based on the gathered evaluations. The 200 companies with the best scores – less than 15 per cent of the eligible companies – were included in the list of Singapore’s Best Employers 2021.

These top employers were segmented into 26 industry sectors, allowing interested readers to view not only the complete list but also the respective industry rankings they are interested in.