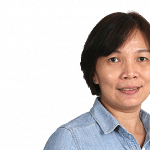 Yasmin used to cover politics, business and the economy in Manila. She was also a Reuters fellow at the University of Oxford. In 2004, she moved to Bangkok where she served as deputy editor of the Asia News Network until 2016. She has a diploma in multimedia journalism from the Asian Centre for Journalism.