The historic meeting between Chinese President Xi Jinping and Taiwan President Ma Ying-jeou in Singapore on Saturday is aimed at consolidating cross-strait peace and cementing a political foundation for peaceful development, say both governments.

China's Taiwan Affairs Office chief Zhang Zhijun was quoted by the Xinhua news agency yesterday as saying the meeting will "mark a start of direct exchange and communication between leaders of the mainland and Taiwan".

Taiwan's Mainland Affairs Council chief Andrew Hsia said at a press conference that a key aim of the meeting is to consolidate cross-strait peace and maintain the status quo.

The first meeting of presidents from both sides since the Chinese civil war ended and the KMT fled to Taiwan in 1949 will take place after Mr Xi's two-day state visit to Singapore starting Friday to mark 25 years of diplomatic relations.

Singapore's Foreign Ministry said the Republic was asked by both sides to help facilitate the meeting and it was happy to do so as "a close and longstanding friend" of both. It called the meeting a "milestone" in the history of cross-strait ties since 1949.

Mr Xi and Mr Ma are expected to hold separate press conferences after their summit, reported to be at the Shangri-La Hotel by Taiwanese media, and have dinner together. Mr Zhang said both men will greet each other as "Mister", instead of their titles, as neither officially recognises the other as head of state. 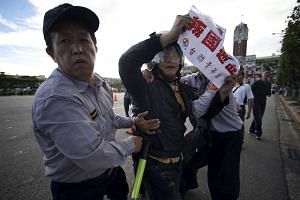 Chinese are upbeat but reactions mixed in Taiwan

The announcement of the meeting late on Tuesday by Mr Ma's spokesman surprised many, given both leaders' recent words and deeds. 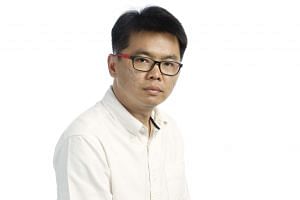 Mr Xi reportedly rejected Mr Ma's request to meet at the Apec summit in Beijing last November. Mr Ma said previously he would not meet a Chinese president while in office unless there was a need and public support. 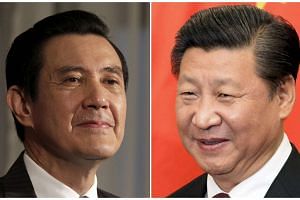 Observers say a key factor for the meeting is a mutual desire to improve the KMT's chances in Taiwan's presidential election next January, where the pro-independence Democratic Progressive Party (DPP) is tipped to wrest power.

Ms Tsai Ing-wen, the DPP presidential candidate who is leading KMT chairman and candidate Eric Chu in opinion polls, yesterday criticised the "hasty and chaotic" manner of the announcement as "damaging to Taiwan's democracy".

Mr Hsia said the meeting was broached by Mr Zhang and there was nothing rushed or opaque about Taiwan's push for it.

Elsewhere, most are cautiously optimistic, with Washington welcoming steps to reduce tensions by its strategic rival China and ally Taiwan. The Taiwan stock market yesterday had its highest close since July on optimism that the meeting would improve cross-strait ties.

A version of this article appeared in the print edition of The Straits Times on November 05, 2015, with the headline 'Xi-Ma meeting in S'pore a 'milestone' in ties'. Subscribe
Topics:
More
Whatsapp Linkedin FB Messenger Telegram Reddit WeChat Pinterest Print Purchase Article Copy permalink