Chinese President Xi Jinping said a new chapter of China-Africa cooperation has begun as China seeks to strengthen and deepen its ties with the continent in a time of global uncertainty.

"China-Africa relations are at their best in history," declared Mr Xi at a press conference yesterday following the close of the Forum on China-Africa Cooperation (Focac), now in its 18th year. The two-day summit brought together leaders from over 50 African nations and China.

South African President Cyril Ramaphosa, who was the forum co-chair along with Mr Xi, acknowledged the forum's value as a platform to accelerate development in Africa, while also calling for sharing of knowledge at a time of rapid technological development.

"We are about to set out on a new journey in history," he said, adding that the two sides needed to deliver on the outcomes of the summit "in earnest", to bring tangible benefits to their peoples.

While this is the seventh triennial meeting since it began in 2000, it is just the third summit in which the top leaders of China and African countries have taken part. The other summits were held in Beijing in 2006, and Johannesburg in 2015.

That the third summit comes just three years after the second shows the growing importance of cooperation between China and Africa.

The theme of this year's meeting, which was about building a stronger community and a shared future through beneficial cooperation, was also the title of a joint declaration adopted yesterday.

The summit adopted an action plan, identifying eight major initiatives as the focus of China-Africa cooperation in the coming three years to strengthen practical cooperation.

Mr Ramaphosa, however, continued to drive home the need for knowledge transfer from the Chinese to Africans, something he had raised at the opening of the summit. 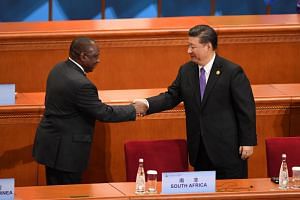 China rolls out more initiatives, including $82b in financing, to help development of African countries

A welcome scramble for a role in Africa

"We all acknowledged that in order to reap benefits of globalisation and the rapid development of technology, we need to work even more closely together and we need to share knowledge and capabilities among us," he said.

He said all sides were committed to "continue working together to accelerate industrialisation, modernisation, infrastructure investment and skills development".

Associate Professor Cui Shoujun of Renmin University said this call was not new, but China is now strongly pushing for it, particularly as labour and land costs in China rise. He noted that while the summit is a continuation of the spirit of cooperation of the past, the strength, depth and scope have grown. This is in part because of the Belt and Road Initiative (BRI) to build infrastructure in developing countries.

Mr Ramaphosa echoed this, saying Focac countries have embraced the BRI "because in it, we see great opportunities to advance the many, many things that need to be improved on the African continent".

Prof Cui noted too that China's own growth in national strength gave it the ability to do more to advance cooperation.