Vietnam appears to be the most likely contender to host the anticipated second summit between United States President Donald Trump and North Korean leader Kim Jong Un, and the South-east Asian nation is most willing to do so, said experts and the media.

Singapore, which hosted the first summit on June 12 last year, is also being considered, alongside other options such as Thailand, Indonesia and Hawaii. Analysts say the venue carries symbolic meaning and will send a signal on what is at stake and how North Korea's denuclearisation can proceed.

Speculation about the summit has gained momentum in the wake of Mr Kim's visit to China earlier this week, in what appears to be a move to shore up Chinese support before he sits down with Mr Trump.

Nuclear talks have failed to advance due to US insistence on pressure and sanctions until North Korea takes concrete steps towards denuclearisation, such as submitting a list of its nuclear weapons.

However, Pyongyang is demanding corresponding measures from Washington, such as the easing of economic sanctions.

Expectations are high that the two leaders will seek to narrow the gap and set clearer goals when they meet again.

Sources in Washington told The Straits Times that the shortlist may be down to Vietnam and Thailand, both of which have offered venues. 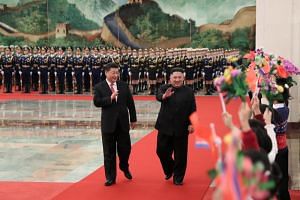 US hopes Trump and Kim can hold second summit early next year: Pompeo

"They both want it," one source said, mentioning Hanoi and Bangkok as possible venues.

The two countries, which have diplomatic ties with both the US and North Korea, can offer several potential venues. The 2017 Apec Summit - attended by Mr Trump - was held in Da Nang in Vietnam. Thailand has hosted major multilateral meetings in Bangkok and Hua Hin, but Phuket and Pattaya also have the requisite infrastructure.

The Thai government, however, is planning to hold a general election "no later than March".

A source told Yonhap news agency that Vietnam is seeking to host the summit in the coastal city of Da Nang "for security reasons".

However, some analysts warn that choosing Vietnam could send the wrong message.

Vietnam has been lauded as a role model for North Korea in terms of prosperity and normalising ties with the US. But Asian politics expert Sean King of Washington-based consulting firm Park Strategies does not see a parallel, arguing that "North Korea can't risk opening up economically so long as there is a wealthier, larger ethnic-Korean state next door". Vietnam was able to open up only after its own reunification, he added.

Dr Graham Ong-Webb of the S. Rajaratnam School of International Studies said holding the summit in Vietnam, which is in China's core geopolitical orbit, "only makes sense if the Trump administration seeks to resolve the Korean peninsula crisis in a way that also sticks it to China". This could mean the US offering "very attractive economic and security carrots in return for not only denuclearisation, but also North Korea's strategic alignment with the US against China".

Could Mr Trump and Mr Kim revisit Singapore? This "will be akin to pressing a reset button in recognition of the fact that nothing has moved since June 12",said Dr Ong-Webb.