Move is likely to anger China, but Pentagon chief says US is not embarking on arms race

The new Pentagon chief said the US was now free to deploy the weapons following its withdrawal last Friday from the Intermediate-range Nuclear Forces (INF) treaty with Russia.

"Yes, I would like to," Mr Esper said when asked if the US was considering deploying new medium-range conventional weapons in Asia.

"We would like to deploy a capability sooner rather than later," Mr Esper told reporters on a plane to Sydney at the start of a week-long tour of Asia. "I would prefer months... But these things tend to take longer than you expect."

The plan to deploy new missiles in Asia is likely to anger China, which is vying with Washington for influence in the region, but Mr Esper said Beijing should not be surprised.

"That should be no surprise because we have been talking about that for some time now," he said.

"And I want to say that 80 per cent of their inventory is INF-range systems. So that should not (be a) surprise that we would want to have a like capability."

But Mr Esper stressed that the US was not embarking on a new arms race. "The traditional sense of an arms race has been in a nuclear context," he said. 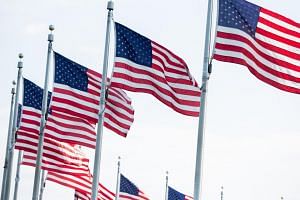 After INF treaty's demise, US seeks funds for missile tests

"Right now, we don't have plans to build nuclear-tipped INF-range weapons. It's the Russians who have developed non-compliant, possibly nuclear-tipped weapons.

"So I don't see an arms race happening. I do see us taking corrective measures to develop a capability that we need for both the European theatre and this theatre, the Indo-Pac-Com theatre."

Separately, the United States announced plans to test a new missile amid growing concerns about emerging threats and new weapons.

US officials said they are no longer hamstrung and could now develop weapons systems previously banned under the INF treaty with Russia, a Cold War-era agreement that both sides repeatedly accused the other of violating.

President Donald Trump said he has been discussing a new agreement to reduce nuclear weapons with China and Russia.

"And I will tell you China was very, very excited about talking about it and so was Russia," Mr Trump told reporters. "So I think we'll have a deal at some point."

A senior administration official downplayed the upcoming US weapons test, saying it was not meant to be a provocation.

The official, who was not authorised to publicly discuss the test flight, said the US is "years away" from effectively deploying weapons previously banned under the agreement.

China's United Nations Ambassador Zhang Jun last Friday challenged what he said were efforts to make his country "an excuse" for the demise of the INF treaty.

"You know, the United States is saying China should be a party in this disarmament agreement, but I think everybody knows that China is not at the same level with the United States and the Russian federation," he said.

The point of arms control is to limit or stop a competition in weapons that, if left unconstrained, could endanger not just the big powers, but much of the rest of the world.

Nuclear weapons are the clearest example of this, but advances in technology, the rise of China and the spread of nuclear capabilities to smaller countries like North Korea have complicated the problem.

A version of this article appeared in the print edition of The Sunday Times on August 04, 2019, with the headline 'US wants to quickly deploy new missiles in Asia'. Subscribe
Topics:
More
Whatsapp Linkedin FB Messenger Telegram Reddit WeChat Pinterest Print Copy permalink