In its editorial, the paper says that China and the US should be aware of their grave responsibility to the global economy and look for ways to ease the confrontation.

Stock markets in Europe and North America plunged across the board on Monday, with the Dow Jones industrial average shedding 767 points, this year's biggest decline.

On Tuesday, the Nikkei 225 index briefly fell by more than 600 points.

The stock market plunge came as US President Donald Trump announced last week that he would impose a "fourth round" of punitive US duties on Chinese imports starting Sept 1.

He mentioned the stalling trade talks as a reason. Trump said he would slap a 10 percent tariff on an additional $300 billion ( S$415 billion) worth of Chinese products.

Around this time every year, the Beidaihe conference is held, an important meeting attended by the Communist Party of China's leadership and senior members.

This time, the focus of the conference will be its US policy. Trump may have spelled out his new punitive steps to coincide with this annual gathering so as to shake the Chinese side.

China's Ministry of Commerce announced that China has temporarily suspended purchases of US agricultural products as a countermeasure.

In trade negotiations, both parties will clash with each other, with their national interests at stake. 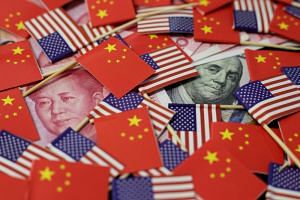 The strange link between tariffs, opioids, and opium

How Trump and Xi can make America and China poor again

There could also be manoeuvring on both sides. But if the two economic superpowers repeatedly exchange sanctions and retaliation, it will deal a serious blow to the global economy.

Both the United States and China should be aware of their grave responsibility.

The next round of ministerial-level negotiations will be held as early as early September. Both sides should look for ways to ease the confrontation.

It is worrisome that their rivalry has even spread to the realm of currency.

The Chinese yuan fell to the 7-per-dollar level for the first time in about 11 years. The US Treasury Department said that China took measures over the past few days to lower the value of its currency, and labelled China a "currency manipulator."

Washington has long criticised Beijing for guiding its currency lower to give an advantage to its exporting enterprises.

The US government may embark on yet another round of sanctions against China in the days ahead, if Beijing does not respond to US calls for it to take corrective steps.

Trump is probably thinking that adhering to his hard-line policy toward China will work to his advantage in the presidential election next year.

It is highly likely the turmoil will last for a protracted period.

Needless to say, there are lots of problems on the part of China, too. Investors have pointed out that China's exchange rate policy is opaque.

Infringement of intellectual property rights by China and its excessive subsidies to its state-owned business enterprises have been regarded as problematic by other countries. What China is called on to do is to rectify its unfair practices.

The Japanese economy will inevitably be affected. Should the yen strengthen further as a result of the US-China trade row, it would exert downward pressure on the performance of Japanese export-oriented companies.

With the consumption tax rate hike scheduled for October as well, it would become even more difficult to guide the management of the overall economy.

In order for the nation to be able to respond flexibly, it is important for the government and the Bank of Japan to cooperate closely, and to work out the details of relevant policies.