In this editorial, the paper says that the future of the Thai kingdom and the wider region hangs on its successful return to civilian rule.

Mishandling either task would invite serious damage to both the country and the wider region.

Junta chief General Prayut Chan-o-cha has made a bad start in tackling the first challenge, repeatedly announcing an election date only to break his pledge.

Domestic and international pressure has grown with each postponement, and the world is now watching to see whether Thailand will actually return to the fold of civilian rule this spring.

The year's end brought yet more rumours of a further delay, with the Election Commission reportedly uncertain whether ballot cards could be printed up in time for February 24.

Senior politicians dismissed the notion that technical problems were a valid reason for another postponement. The speculation and rumours won't end until the date is officially announced.

Meanwhile, public doubts surrounding the poll are damaging the credibility of concerned agencies and therefore of the election itself. Already, few neutral observers believe it will be conducted in a free and fair manner. 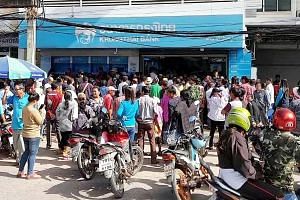 Thailand gears up for a return to polls

The junta leaders have shown a clear intention to extend their stay in power and are eyeing the election as a means to legitimise their rule.

The pro-junta parties are now using all means available to win the election, spending national budget to woo voters, as well as poaching former MPs from other parties.

The international community sees the election as a peaceful means for Thai citizens to once again choose who leads them, following a major political setback due to bitter political division and the military coup of 2014.

While the coup-makers led by Mr Prayut claim they intervened in politics to bring about national reconciliation and reform, their actions over the past four years have achieved neither task.

The political divide remains just as wide and bitter while reforms have done nothing to strengthen national institutions.

The new Constitution and its organic laws were in fact promulgated to weaken the checks and balances, thus strengthening the hand of the military in future political manoeuvrings.

The Constitution was also designed to prevent a single party winning a majority of the 500 seats in the House of Representatives, meaning a coalition of several parties is likely to form the new government.

And if the parties fail to settle their differences in selecting a new premier, the charter dictates "outsiders" can join the race to become prime minister.

In that case, we might ask what the point was in holding an election, since the people's mandate would be ignored.

The election will have ramifications for the Asean chairmanship.

Thailand raised eyebrows in the region by proposing that the year's first Asean summit be held in late June, rather than early in the year to give regional leaders as much time as possible to work on the Asean agenda.

The Asean chair usually hosts summits twice a year, the first one around March or April followed by another in November. But the schedule has been put back to make way for the Thai election, to establish a new government to lead the regional grouping.

The region is now waiting to see whether the poll delivers the kind of political turmoil that ruined the Asean summit of 2009 in Pattaya.

The next Thai government will also help determine the future of Asean.

If the election brings new leadership with a clear vision and ability, Asean will benefit with a boost to its centrality in regional security architecture and economic integration.

If, on the other hand, the poll sees the current Thai leadership retain its position, Asean is unlikely to make significant progress in that mission, instead facing a year of routine meetings and stagnation.