MANILA - United States President Donald Trump focused on trade in his first summit with leaders of South-east Asia's 10 nations, again underscoring the need for "reciprocity" in US dealings with its trading partners as his 12-day trip through Asia draws to a close.

"It was all trade," Mr Harry Roque, Philippine President Rodrigo Duterte's spokesman, said at a news briefing, referring to Mr Trump's agenda during the Asean-US summit on Monday (Nov 13).

Mr Trump had told a gathering of Pacific Rim leaders the US would no longer tolerate "chronic trade abuses" from the region, reverting to his hard-edged "America First" economic agenda after a week of more conciliatory tones in Tokyo and Beijing.

Other Asean leaders noted the importance of warm Asean-US ties at the summit, which also commemorated the 40th anniversary of Asean-US dialogue relations. 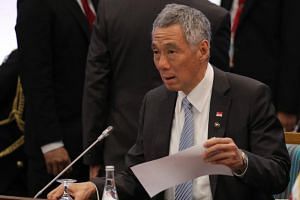 In his remarks to fellow leaders, released to Singapore media, Singapore's Prime Minister Lee Hsien Loong outlined the importance of economic relations between the US and South-east Asia.

"Asean is a key economic partner of the US and vice versa, with tremendous growth potential for US businesses," he said.

Mr Lee noted the region is already the US' fourth-largest trading partner and creates more than half a million jobs for Americans through trade in goods and services, he said.

He added that "with a combined population of over 600 million, a growing middle class and a youthful demographic that is adept at technology and adapting to the digital economy, Asean is a bright spot in the world economy".

He expressed hope that when completed, the Expanded Economic Engagement initiatives between Asean and US "will encourage a fair and mutually beneficial trading and investment climate".

Mr Lee, in his intervention, said terrorism "remains a serious, acute and continuing threat for the region".

He said despite setbacks dealt on it in the Middle East and in the war-torn southern Philippine island of Mindanao, the threat from terror group ISIS "remains serious".

Violence can come from lone-wolf attacks and fighters returning to South-east Asia from the Middle East, he said.

"So, we must continue to be vigilant and pursue deeper cooperation in counter terrorism," said Mr Lee, who hoped the US would continue to support the counter-terrorism efforts of Southeast Asian countries, including the Philippines, Indonesia, Malaysia and Singapore.

He also touched on the South China Sea briefly, saying: "Asean appreciates the US' consistent support for our efforts to build a rules-based regional order and to resolve maritime disputes peacefully in accordance with international law including the 1982 UN Law of the Sea Convention."

"There is no easy and quick solution to the issue. We need a combination of good pressure and dialogue among all stakeholders to make progress on a delicate situation," he said.

On the Rohingya crisis, Mr Roque, Mr Duterte's spokesman, said two Asean members had brought it up, and that Myanmar welcomed humanitarian aid for hundreds of thousands displaced by fighting in Myanmar's Rakhine State.

More than 600,000 Rohingya Muslims have fled the region to Bangladesh after rebel attacks on Myanmar security forces sparked widespread violence, with soldiers teaming up with vigilante mobs to slaughter civilians and burn entire villages to the ground. Around 30,000 Hindus and Buddhists based in the area have also been displaced by the fighting.

Malaysia's Foreign Minister Anifah Aman, though, told reporters on Sunday (Nov 12) that his country's proposal to send a "peacekeeping force" to Rakhine state "is under consideration".

Trump hits it off with Duterte, says Philippines vital for military reasons

Singapore will do all it can to push RCEP negotiations forward as Asean chair: PM Lee

Asean has to stay united and credible, says PM Lee

Asean army shooting meet gets off the mark