MANILA - President Donald Trump has mended the United States' ties with the Philippines, a longtime ally, but it has come at the expense of the US standing as a champion of human rights.

Despite pressure from rights groups for him to take a tough line on the thousands killed by police and vigilantes in Mr Duterte's bloody war on drugs, Mr Trump instead settled for mutual flattery.

He spoke of his "great relationship" with Mr Duterte. "We have a very, very strong relationship with the Philippines, which is really important: less so for trade, in this case, than for military purposes," he said on Tuesday (Nov14).

Mr Duterte responded by serenading him with a Filipino love song at a gala dinner.

The Philippine leader has come under intense international criticism for his drugs war, that has led to the police killing over 3,900 suspects since he took office last year (2016).

Ties between the Philippines and the US were strained under former president Barack Obama, who raised concerns over Mr Duterte's human rights record. The latter had rained profanities, even racial slurs, at Mr Obama.

Last year, Mr Duterte called for a "separation" from the US, threatened to expel US troops, and accused the Central Intelligence Agency of plotting to kill him.

But there was none of his trademark hostility during his meetings with Mr Trump.

"Trump wasn't on a mission to lecture but to reassure allies of US commitment to the region," said political commentator Ana Marie Pamintuan. "If Trump had intended to harp on human rights, he should've been an equal opportunity critic."

What Mr Trump brought with him to Manila was his push for fair trade. He reiterated the message he sent during last week's Asia-Pacific Economic Cooperation summit in Danang, Vietnam, "that it's high time the US practise reciprocity." He told the Asian-Pacific leaders that the US would no longer tolerate "chronic trade abuses" from the region as it focused on its "America First" economic agenda.

There was also no clear assurance from Mr Trump that South-east Asia remains central to US foreign policy.

He did not follow through on his offer to mediate in disputes over the South China Sea in Danang. He said he was concerned over the arms buildup in the contested waters, but did not single out China.

That ambiguity has fed a growing sense that for now, China, not the US, is driving the agenda in South-east Asia.

"Allies have shown their willingness to move past America and actively construct a post-American world, partly to expand regional trade as well as to keep China's rising influence in check," said political analyst Richard Heydarian at De La Salle University in Manila.

"Absent of any tangible economic alternatives from America and its allies, a growing number of regional states will have no choice but to accept Beijing's economic offensive. What is at stake isn't only American hegemony but also the autonomy of smaller states as well as the survival of a rules-based order in Asia,'' he added. 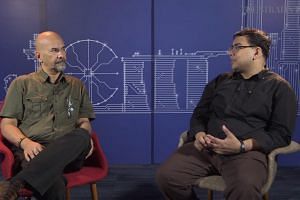 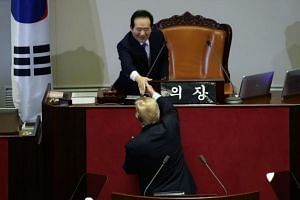 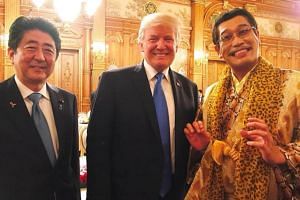