BEIJING • Even before the Sino-US trade war, President Xi Jinping's plan to turn China into one of the world's most advanced economies by 2050 was ambitious.

His grand vision is now looking more aspirational by the day.

As mounting pressure from United States President Donald Trump adds to a slew of structural challenges facing China's US$14 trillion (S$19.3 trillion) economy - including record debt levels, rampant pollution and an ageing population - the risk is that the country gets stuck in a "middle-income trap", stagnating before it reaches rich-world levels of development.

Economists say Mr Xi's government can avoid that fate by boosting domestic consumption, liberalising markets and increasing the country's technological prowess. But it would not be easy.

The International Monetary Fund (IMF) highlighted Mr Xi's challenge last Friday, saying in its annual report on China's economy that if a comprehensive trade agreement is not reached, it would damage the nation's long-term outlook.

"China's access to foreign markets and technology may be significantly reduced," the IMF said.

Odds of a near-term trade deal appear low. After Mr Trump issued a surprise threat to apply new tariffs on US$300 billion of Chinese goods two weeks ago, Beijing responded by halting purchases of US crops and allowing the yuan to depreciate on Aug 5 to the weakest level since 2008.

Mr Trump's administration fired back within hours, formally labelling China a currency manipulator. The White House is also holding off on a decision to grant exemptions to US firms that want to do business with Huawei Technologies, the Chinese tech giant placed on a US blacklist in May, people familiar with the matter said.

Any concessions from China are unlikely until October at the earliest, said Mr Jeff Moon, a former assistant US trade representative for China affairs. Mr Xi faces growing internal pressure to project strength as anti-government protests in Hong Kong intensify and China prepares to celebrate the 70th anniversary of the founding of the People's Republic on Oct 1. "Any sign of weakness is unacceptable to Chinese leaders," Mr Moon said. 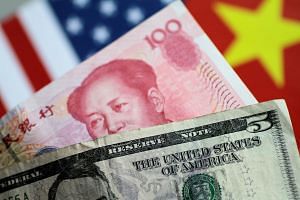 In the short run, China's government has ample firepower to prevent economic growth from falling below the 6 per cent lower bound of its annual target range.

Mr Xi has also made some progress in tackling China's long-term challenges.

A more than two-year deleveraging campaign has helped wring some of the worst excesses out of the country's debt markets, while regulators have taken a much harder line on high-polluting industries in recent years. The service sector now accounts for more than half of gross domestic product (GDP).

China has poured billions into developing a home-grown high-tech industry, going head-to-head with the West in areas like artificial intelligence and electric vehicles.

In an October 2017 speech that laid out his long-term vision for the Chinese economy, Mr Xi vowed to join the most innovative countries by 2035 on the way to superpower status by 2050.

Yet the trade war has laid bare just how far China remains from some of Mr Xi's targets.

The most striking example: America's blacklisting of Huawei, which threatens to cripple the Chinese national technology champion because local chip designs are not yet sophisticated enough to replace those from the US.

Debt and demographics are two other big challenges.

China's debt burden has continued to rise despite the deleveraging campaign, climbing to about 303 per cent of GDP in the first quarter, one of the highest ratios among developing nations, according to the Institute of International Finance.

The country's working-age population is forecast to shrink by more than 20 per cent to 718 million by 2050, according to data compiled by the United Nations.

China's economy is still expanding faster than its rich-world counterparts for now, but its advantage is shrinking.

Growth slowed to 6.2 per cent in the second quarter, the weakest pace in at least 27 years, and Standard Chartered estimates that if Mr Trump's threatened tariffs come into effect on Sept 1, they could slice 0.3 percentage point off China's annual rate of expansion.