Mr Kim was handed the letter by a North Korean envoy who met Mr Trump at the White House last week and gave him a missive of his own.

After their talk, Mr Trump said his next summit with the North Korean leader would probably take place near the end of next month, without giving an exact date or location.

It carried a picture of a broadly smiling Mr Kim holding what appeared to be the letter from Mr Trump and sitting in a plush brown leather armchair in his office with Mr Kim Yong Chol.

"We will believe in the positive way of thinking of President Trump (and) wait with patience and in good faith," KCNA cited Mr Kim Jong Un as saying. He also ordered preparations to be made for the second summit, KCNA reported, in the North's first official comment on the prospective meeting. 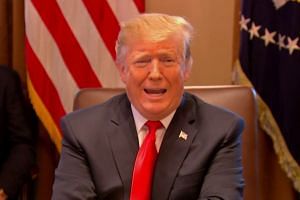 Mr Kim and Mr Trump's first encounter was a high-profile summit in Singapore last June - the first meeting between a sitting US president and a North Korean leader.

There, they signed a vaguely-worded document in which Mr Kim pledged to work towards "the denuclearisation of the Korean peninsula". But progress has since stalled, with the two sides disagreeing over what that means.

Pyongyang is seeking sanctions relief and rejects demands for what it calls its "unilateral" disarmament, while Washington insists the measures must stay in place until the North gives up its nuclear arsenal.

Even so, last Saturday, Mr Trump said a location for the summit had been decided, without giving more details.

Analysts say a second summit has to make tangible progress on the issue of Pyongyang's nuclear weapons if it is to avoid being dismissed as "reality TV".

Meanwhile, Vietnam said yesterday that it had not been informed about any time or venue of a possible second summit, but is confident of its ability to host such a meeting.

Hanoi is preparing to receive the North Korean leader for a state visit, two sources told Reuters on Jan 17, while officials and diplomats said Vietnam was keen to host a second summit.

"It is up to the US and North Korea to decide on the location and the timing of the summit," foreign ministry spokesman Le Thi Thu Hang told a regular news conference yesterday.

Ms Hang said Vietnam had no information about a summit or a possible state visit by either Mr Trump or Mr Kim, but that it would be able to accommodate them if asked.

Vietnam hosted the 2017 Asia-Pacific Economic Cooperation (Apec) summit in the central city of Danang, and, in September last year, the capital, Hanoi, played host to the World Economic Forum.

Both events were attended by several high-profile world leaders, and both cities have been widely touted as possible locations for the second summit. There has also been speculation about other possible venues, including Bangkok, Hawaii, and a return to Singapore.