Tropical South-east Asia has not been spared the wintry chills.

Thailand, Myanmar, Laos and Cambodia have been enveloped by an unexpectedly cold front, which descended from China last week.

In Samoeng, a district in the northern Thai province of Chiang Mai, the government distributed blankets and winter clothes to 7,000 residents last Friday as temperatures plunged to 5 deg C, The Nation newspaper reported.

Thailand's Meteorological Department has predicted that temperatures in areas, excluding the south, will drop by another 2 to 4 deg C during the New Year holidays.

People in parts of Myanmar were also shivering in temperatures as low as 3 deg C.

Snow fell in the districts of Loilen, Panglong and Pinlaung in the southern Shan state, where temperatures dropped to between 3 deg C and 5 deg C, residents told the Eleven newspaper. "Plantations have been destroyed," said villager Sai Tuu. She said older people, especially, were suffering in the cold snap.

Even elephants have had to be bundled up. At the Winga Baw camp for orphaned elephants in Bago, a region in Myanmar 90km north-east of Yangon, workers wrapped the seven pachyderms in their care with blankets.

"We haven't had weather this cold in 40 years," Ms Sangdeaun Lek Chailert, founder of the Save Elephant Foundation which runs the camp, told The New York Times on Sunday. 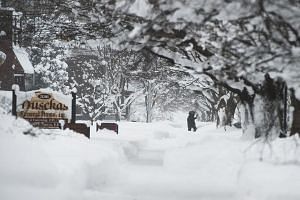 Meanwhile in Japan, heavy snow and strong winds continued to blanket the country's northern and central regions, broadcaster NHK said yesterday. The areas had seen up to 60cm of snow in the 24 hours starting Wednesday, and was expected to receive 40cm more by this morning, it added.

Weather officials warned of avalanches in some areas and said transport systems may be affected.

On the other side of Asia, severe cold weather coupled with dense fog blanketed many cities across Pakistan last week. At least 11 people were killed and 28 others injured last Thursday after a bus hit a trailer in Khanewal, Punjab province, due to low visibility.