The trade war between China and the United States escalated sharply last evening as Beijing slapped higher tariffs on a range of US goods - just hours after President Donald Trump had warned it not to retaliate.

Beijing, which has been smarting since the US announced higher tariffs on many Chinese products last Friday, said more than 5,000 US goods, worth about US$60 billion (S$82 billion), would face import tariffs ranging from 5 per cent to 25 per cent.

China's response spooked US stock markets, with the Dow opening 1.44 per cent lower and the Nasdaq slumping 2.49 per cent. Earlier in the day, markets in China and across Asia fell, gripped by fear of renewed trade hostilities.

There are also concerns that each side has more weapons in its armoury to hurt the other, which could be unveiled in the coming days. Reports that Beijing was deliberating over whether to stop buying US agricultural products also sparked a plunge in soya bean and cotton prices.

At the same time, since the tariffs do not kick in immediately, there are hopes that both countries might try to claw back a deal after talks failed last week.

China's tariffs will take effect on June 1, roughly matching the US timetable. Higher US tariffs do not apply to Chinese goods shipped before it took effect last Friday, and sea freight to the US takes about three weeks.

China's latest salvo was in response to the US move to raise tariffs at the weekend on US$200 billion worth of Chinese goods from 10 to 25 per cent. Beijing said this "violated the consensus of China and the US to resolve trade differences through consultations and harmed the interests of both sides". 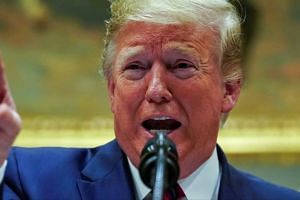 Hours before Beijing's announcement, Mr Trump addressed the issue in a flurry of Twitter posts. He said China "had a great deal, almost completed, and you backed out!" There "is no reason for the US consumer to pay the tariffs... China should not retaliate - will only get worse!" He also warned that "China will be hurt very badly" if a deal is not reached soon.

Beijing has framed the debate as a matter of respect and dignity, and said it will not compromise on principles.

Chinese Foreign Ministry spokesman Geng Shuang yesterday reiterated that China will never succumb to foreign pressure in the escalating trade dispute. "We have the will and determination to protect our legitimate rights and interests," he told a regular briefing.

While both sides have held that trade talks will continue, any possible deal now has to be ironed out in a volatile environment, said analysts.

Professor Wang Yiwei of the China Council for the Promotion of International Trade said: "There is still a chance that Mr Trump is simply trying to extract some last-minute concessions from China, but what the US is now asking for goes beyond trade deficits to governance-related issues such as its laws and investigation mechanisms."

But Prof Wang held out hope of a deal being reached in time for the Group of 20 summit next month in Japan. White House economic adviser Larry Kudlow said on Sunday Mr Trump and Chinese President Xi Jinping could meet next month on the sidelines of the summit.

Mr Kudlow also admitted that the increased US tariffs would be paid for by "both sides", which contradicted Mr Trump's assertion that US consumers would not be affected by the latest hike.

Prof Wang said: "If an agreement isn't reached by the G-20 summit, it will look really bad for both sides when the meeting commences."

A version of this article appeared in the print edition of The Straits Times on May 14, 2019, with the headline 'Trade war escalates as China raises tariffs on US goods'. Subscribe
Topics:
More
Whatsapp Linkedin FB Messenger Telegram Reddit WeChat Pinterest Print Purchase Article Copy permalink