27 of 33 govt entities inflated number of staff with disabilities

The Japanese government has been found to have inflated the number of people with disabilities under its employment by 3,460 to meet a legal quota, in a damning investigation revealed yesterday that has stoked domestic furore.

The data padding had been done at 27 out of 33 government entities, the Labour Ministry said.

It added that the government's employment ratio of those with disabilities stood at 1.19 per cent in June last year - way below the earlier reported 2.49 per cent and under the legal threshold, which was at the time 2.3 per cent.

At 17 other entities, including the National Tax Agency and the justice, transport and foreign ministries, the ratio fell below 1 per cent after the recount.

Health and Labour minister Katsunobu Kato told a news conference yesterday that thousands have been wrongly counted to be "disabled", including in some cases staff with diabetes.

This implies that, deep down, the government is hoping not to hire workers with disabilities.

We deeply apologise for something that should not have happened to the government, which has a responsibility to secure employment for people with disabilities.

"We will make all efforts to meet the legal requirement by this year," he said, adding that those who were wrongly classified as disabled will keep their jobs. "But if that becomes difficult, we will draft a plan to achieve the goal next year, as the law requires us to do."

The investigation did not conclusively find if the doctoring was done deliberately or was due to lack of understanding of the rules by human resource personnel. To be seen as disabled, one must hold a disability certificate or a medical rehabilitation handbook.

Domestic media has cited government sources as saying this data manipulation could have been a systemic problem dating back 42 years, to 1976, which was when Japan set the legal threshold in its push towards an inclusive society.

Calling the situation "totally inexcusable", top government spokesman Yoshihide Suga said: "We deeply apologise for something that should not have happened to the government, which has a responsibility to secure employment for people with disabilities."

The scandal could yet worsen as similar cases have been reported at the local and municipal government levels. A tally by public broadcaster NHK has shown that as many as 34 out of Japan's 47 prefectures could have overstated the numbers of disabled in their employment.

The Labour Ministry probe was first prompted when it received enquiries in April this year, from the ministries themselves, on how to calculate the employment rates of disabled people for the data that is tabulated and released every June. 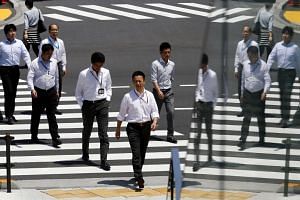 Japan ministries may have inflated numbers of disabled employees: Media

There has already been pushback from the private sector, with some companies calling out the government for its "double standards" and asking for those culpable to be punished, NHK reported.

The non-profit Japan Council on Disability said in a statement on its website that the scandal has caused an "immeasurable shockwave" for the inherent prejudice against those with disabilities. "This implies that, deep down, the government is hoping not to hire workers with disabilities," said its chief Katsunori Fujii.

Sociologist Emi Kataoka of Tokyo's Komazawa University told The Straits Times that the scandal only goes to show how far Japan is from being truly inclusive and will further "detract from people's confidence in the public social system".

The controversy takes place two years before the country is set to welcome disabled athletes for the 2020 Tokyo Paralympic Games.