China has called for - and given its most detailed sketch of - a new Asia-Pacific security framework that builds on existing mechanisms such as the Asean Regional Forum and the Shanghai Cooperation Organisation (SCO).

First, it should be guided by a new security concept - one that focuses on cooperation instead of confrontation - which was first espoused by Chinese President Xi Jinping in 2014 and reiterated this April.

Old security concepts such as the Cold War mentality and the zero-sum game are increasingly out of touch with the trend of globalisation. Win-win cooperation has become the new spirit of the times.

CHINESE VICE-FOREIGN MINISTER LIU ZHENMIN, on being guided by a more inclusive concept of security.

"Old security concepts such as the Cold War mentality and the zero-sum game are increasingly out of touch with the trend of globalisation. Win-win cooperation has become the new spirit of the times," Mr Liu told the forum in Beijing.

Second, the framework should be based on universally recognised regional and international norms instead of the "will of a few countries". Third, it should be held together by partnerships among countries instead of alliances.

Fourth, the new Asia-Pacific security architecture is not meant as the start of a new venture but "will be based on the further coordination, upgrading and improvement of existing mechanisms".

Scholar urges China, US to use restraint in South China Sea 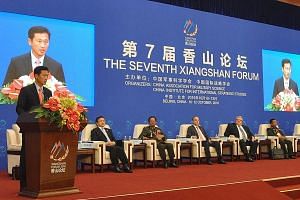 Why Singapore needs world order based on rules

Mr Liu said there is a need for a new architecture to plug the shortcomings of the five existing security mechanisms, from the United States-led alliance system, Asean-centred security dialogue and cooperation frameworks like the Asean Defence Ministers' Meeting, special mechanisms on hot spot issues like denuclearisation on the Korean Peninsula, to regional security cooperation mechanisms such as the SCO and semi-official security dialogues like the Shangri-La Dialogue in Singapore. He said these security mechanisms reflect underlying disconnects in the region - "problems left by the Cold War, lack of coordination among sub-regions and differences on security concepts".

"This calls for the building of an Asia-Pacific security architecture consistent with regional conditions and the interests of all parties," he told the Xiangshan Forum, China's version of the Shangri-La Dialogue. Some 400 delegates from 59 countries and six international organisations are attending the three-day event, which ends today.

Speaking also yesterday, Defence Minister Chang Wanquan said China would continue to contribute to regional security by deepening dialogue and cooperation with all countries. He said that China aims to conduct a joint naval exercise with Asean nations in the South China Sea next year.

Beijing-based military analyst Wang Xiangsui told The Straits Times that it was high time countries in Asia had a regional security framework to call their own.

"Asian countries should be able to resolve our own issues among ourselves without the interference of countries outside of our region," Professor Wang said, adding: "You can't talk about economic integration without the safeguard of a robust security framework."

But Associate Professor Li Ming- jiang of the S. Rajaratnam School of International Studies thinks China's attempt to change the existing regional security architecture is a "mission impossible" in the short term. China faces conflicting interests and dilemmas in different parts of the region - such as North Korea's nuclear ambition, and territorial disputes in both the East and South China seas - and will find it hard to prioritise, said Prof Li.

If it tries to take care of all issues at the same time, the policies will keep changing and it will risk offending other countries, he said. "They will find China unpredictable."