With a month to go before Taiwanese President Ma Ying-jeou leaves office, he sits down with senior regional correspondent Li Xueying for an exclusive interview at the Presidential Palace in Taipei. For over 90 minutes, he spoke on cross-strait relations, his bian dang (bento box) and why he is more popular with mainland Chinese than the Taiwanese, and the troubled waters of the South China Sea.

The reputed Ma Ying-jeou wit appears halfway in the interview.

Asked how he feels about being more popular in mainland China - its netizens last week swooned over a story of how the Taiwanese President has eaten the same NT$50 (S$2.10) bian dang (bento box) of humble fare at work every day for eight years - than in his home of Taiwan, Mr Ma deftly deflected the question with a quip: "That's because their bian dang is not as good as ours."

Everyone in the room laughs.

It was a rare moment of levity in an interview freighted with stoic defence of his policies and some concern over what lies ahead for Taiwan. For over an hour at the Presidential Palace in Taipei on Tuesday, Mr Ma spoke to The Straits Times on issues ranging from cross-strait ties to the South China Sea. 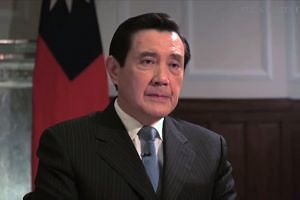 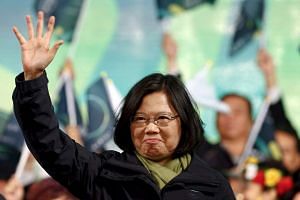 Anxiety as China exerts pressure ahead of Tsai's inauguration 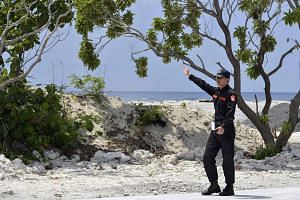 Behind Mr Ma is eight years as Taiwan's leader - one credited with bringing about the greatest stability in the Taiwan Strait since 1949 when Kuomintang (KMT) forces fled to the island following defeat by the Communists on the mainland. Taiwan has been self-ruled since, with China treating it as a breakaway province to be reunified at some point.

He orchestrated warming ties in trade, tourism and transport, culminating in a historic handshake and chinwag with Chinese President Xi Jinping in Singapore last November.

Yet, the 65-year-old will be exiting the political stage on May 19, not quite loved by his compatriots.

History may remember him more kindly. But for now, many Taiwanese are keen to see the back of him and his KMT ilk. On Jan 16, they delivered a stunning indictment of Mr Ma and his policies, giving Ms Tsai Ing-wen and her pro-independence Democratic Progressive Party (DPP) historic control of both the presidency and the legislature.

One key reason is that Taiwan's economy has stagnated, far lagging behind key rival South Korea.

There is also the inexorable rise of the Taiwanese identity, especially among the young who reject the idea of being part of "a family" with China - as Mr Xi put it at the summit. Concern has mounted over whether Mr Ma's ever-closer tango with the mainland comes at the price of over-dependence, to the extent of undermining Taiwan's sovereignty. Beijing has made it clear it hopes economic intertwining will pave the way to political unification.

In Taiwan, some frame Mr Ma's policy as a selling out of the island's interests. In 2014, the Sunflower movement erupted, when students stormed the legislature building to protest against a trade pact with China.

Hence, the question on being more liked on the mainland.

Pressed on this, Mr Ma makes the point that any cross-strait policy "needs to be accepted by the mainland side as well".

He dismisses criticisms that he had compromised Taiwan's sovereignty: "Some people might misunderstand - that if we reach a consensus with mainland China, then Taiwan has to sacrifice its sovereignty, systems, democracy and freedom. However, this is a big misunderstanding."

Instead, over the past eight years, China has made "great progress in showing respect" to Taiwan, he declares. Previously, China would try to influence Taiwan's elections with sabre-rattling. It desisted in 2008, when Mr Ma was first elected, and in 2012, mainland netizens could even monitor the election progress on the Internet.

"After learning of the news, I was surprised and also pleased... That is how both sides should get along with each other," he says.

Such declarations are being crimped somewhat by the ongoing crisis of Taiwanese deported by Kenya to China, in what Taiwan has lambasted as "illegal abduction".

Mr Ma says China and Taiwan share jurisdiction in the matter, but unlike before, Beijing failed to communicate beforehand its intentions.

On why this is happening now despite having invested so much into cross-strait ties, he offered a nod to speculation that it was meant as a warning to Ms Tsai, but added that the main reason is that China believes Taiwan is too lax on fraud suspects who prey on mainlanders.

Beyond Kenya, the President discerns signs of Beijing exerting its pressure on the island - including in what he calls the "critically important" issue of Taiwan's presence at the World Health Assembly next month. To date, the island has yet to receive an invitation to the annual meeting it has attended since 2009.

He carefully refrains from giving his own take on whether temperatures will rise in the Taiwan Strait, saying only that both Taiwanese and foreign dignitaries have expressed different levels of anxiety to him.

"Whether there will be tensions or conflicts in the future, it's up to the next leader of Taiwan."

Mr Ma started his political life 35 years ago as an English interpreter for then President Chiang Ching-kuo. Yet he did this interview in Mandarin, before having his words laboriously translated. His spokesman explains that it is policy: The leader of the Republic of China should - in public - speak the nation's language.

The linguistic straitjacket feels almost apt for the man who helms an island not in full control of its destiny.

On the economy, Mr Ma says three major downturns meant that Taiwan's growth is "not as good as expected". But, he asserts, other economies are suffering too, and so "actually Taiwan has been doing quite well" in global rankings.

On the rise of the Taiwanese identity, he says this does not mean people want Taiwan independence. "It is not viable and it is not a necessary approach. We now already elect our own president, our own Parliament, we handle our own affairs. Who do we have to be independent from?

"As for reunification, the conditions are not ripe yet."

So, people's ambivalence about his cross-strait policies, he believes, is more cosmetic than substance. "Regarding our efforts to promote some policies, maybe some believe we do not communicate or explain enough," he says.

What has happened, he suggests, is that the public has taken the stability for granted. "Eight years is not a short period of time. So gradually maybe people take it for granted.

"Maybe some people do not really understand that the status quo that they enjoy does not come from heaven."

Instead, he says, it stems from the 1992 Consensus - the controversial understanding between Taiwan and China that there is "one China, with different interpretations".

It was a clear shot at Ms Tsai, who has said she wants to maintain the status quo but baulks at recognising the 1992 Consensus, the existence of which the DPP disputes.

One word that Mr Ma is fond of using when talking about navigating cross-strait relations is the need for "wisdom". On whether he thinks his successor has that trait, he parries with a tight smile: "We hope that she does."

So what is next for Mr Ma, interpreter, father of two, Justice Minister and Taiwan President?

Some, including his former thesis adviser Jerome Cohen, a law professor at New York University, believe there is a peacemaker role that Mr Ma could fill in the troubled waters of the South China Sea, much like what former US president Jimmy Carter is doing in the Middle East. "That is wonderful advice," says Mr Ma, adding that he will continue acting on his concerns over these issues.

On what he hopes to see as his legacy, he says he had three goals eight years ago - to build a free, fair, just and prosperous Taiwan, to create peaceful cross-strait relations, and friendly international relations.

"We have created a sound domestic and external environment for Taiwan. I believe that I can leave this question for the people of Taiwan. They can be the judge."

A previous version of the story stated that the Sunflower movement occurred in 2013 instead of 2014. This has been corrected. We are sorry for the error.

A version of this article appeared in the print edition of The Straits Times on April 21, 2016, with the headline 'Ma: Let the people be the judge'. Subscribe
More
Whatsapp Linkedin FB Messenger Telegram Reddit WeChat Pinterest Print Purchase Article Copy permalink