He did well in Singapore but returned to China to care for his young son. His career has taken off. The catch? His wife stayed in Singapore

The most difficult choice that Chinese national Wang Cheng Jun ever had to make was leaving Singapore.

Mr Wang and his wife Zhang Limin, also from China, had spent three happy years working and living together in Singapore. He was a recruitment agent, initially as an S Pass holder before gaining an Employment Pass, and she was on an S Pass as a nurse.

But the birth of their first son in 2013 turned this life upside down.

Mrs Wang went back to China to give birth to Zi Hang in the couple's home province of Henan. The family planned at first to return to Singapore together.

Then reality hit: the couple realised that they could not raise their child in the country they wanted to call home. This was because of their long working hours, and under their S Passes, their salaries were not high enough to allow them to bring in dependants like Mr Wang's mother, who could take care of the baby.

In the end, Mr Wang decided to move back to China to take care of the baby boy. It would be easier for him to find a better job back home, he reasoned, and his wife could stay in Singapore as a nurse, a job she could not bear to give up.

Two years later, the 33-year-old has become second-in-command in a recruitment firm based in Luoyang, Henan, sending out Chinese workers to Singapore.

As vice-general manager of recruitment firm Luoyang New-Link, he could now be said to be on equal footing with those he used to work for in Singapore, and estimates he earns easily twice to three times as much as he did then, which was around $3,000 a month.

However, he still misses Singapore - its standard of living, its orderly traffic, how one could easily take a weekend getaway to Bali or Bintan, and the fact that spitting on the road is frowned upon.

He is also painfully conscious that raising his son apart from his wife is getting tougher.

Mr Wang told The Sunday Times in Mandarin: "I have never thought as hard about anything as I did about leaving Singapore. It was the hardest decision I have ever made in my life."

With more than three years of work experience in Singapore under his belt, Mr Wang had his pick of job offers when he returned to China.

However, he chose to become a shareholder partner in Luoyang New-Link, a small agency in Henan.

Located in central China, south of the Yellow River, Henan has more than 94 million inhabitants.

Mr Wang was born in a small town two hours away from the city of Xinxiang in northern Henan. His parents were wheat farmers. Before he went to secondary school, he had never seen a computer.

Before he went to Shandong University, he did not own one.

Mr Wang graduated with a bachelor's degree in foreign language studies - he had learnt English and Japanese - and began working as a recruitment agent for a textile export company in the seaside town of Weihai.

He married his university sweetheart in 2008, but Mrs Wang was restless in Weihai. She disliked the life of a nurse in China, with its long overnight shifts and poor work-life balance.

"There's also the need to have connections," the 32-year-old said. "China is a giant network of connections.

"Getting promoted is not really according to your abilities. It was a big headache for me. I could not play their game."

When the opportunity to work as a private nurse in Singapore cropped up in 2008, Mrs Wang jumped at it. By 2009, she had moved to the National Kidney Foundation, where she still works today.

Mr Wang remained in his job in Weihai until he was able to follow her a year later, after he was approached by a Singapore agent who needed urgently to fill a vacancy at a recruitment firm.

He admitted that he did not really think it through, but he was young and felt he had nothing to lose.

His bravado flagged only once, when he said goodbye to his childhood friend before boarding a bus to the airport. "It hit me that I was leaving a familiar, safe place to go to a totally strange environment," he said. "I started crying uncontrollably."

In Singapore, the couple lost a lot of weight - Mr Wang estimated he dropped about 10kg because he had no friends to go out and eat with - but gained in other ways.

Within a year of his arrival, he had moved to recruitment firm People Worldwide Consulting as a general desk manager and had been upgraded to an Employment Pass, which was for those who earned $2,800 or more a month back in 2011.

When his son was born in Xinxiang, Mr Wang was on a plane from Singapore to China - but not for the birth. Instead, he was headed to Shanghai for a major recruitment project. Shortly after he boarded the plane and switched his phone off, his wife went into labour.

Mr Wang recalled: "While she was giving birth, I was flying through the air, clueless. It was only after I landed that I turned on my phone and saw all these messages.

"I had trouble believing it at first. I got off that plane and suddenly I was a father."

Even then, it was many more hours before Mr Wang could wrap up his business in Shanghai and fly to Xinxiang to see the new mother and child. "I couldn't abandon my client," he said. 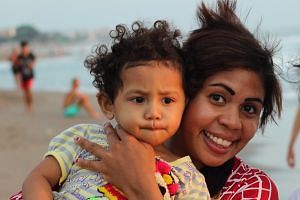 Within a few months of Zi Hang's arrival, the couple had to return to Singapore to continue working, leaving him behind in China in the care of Mr Wang's 60-year-old mother.

But he said: "My wife was worried every day. She feared my mother wasn't taking care of our son well. Every day, we would fight over the smallest things, where we never fought before. She would cry all the time."

Mr Wang realised something had to give. By the end of the year, he had returned to China. He said: "I don't see it as a sacrifice. My son's existence prompted me to make a decision, and so far I think it has been a good one."

He added: "If my wife can get permanent resident status, we can live together in Singapore again some day. We want to send our son to school there, because the education system is better than China's. In a way, my wife is staying in Singapore for the sake of our son's education."

Zi Hang is now two years old. He is vaguely aware that his mother is in a faraway place called Singapore, accessible sometimes by the phone app WeChat. "We call her and I show her the cars Papa has bought me," he mused in Mandarin. "Or I tell her stories. I sing her songs they teach me in class."

Talking about the separation of her family brings tears to Mrs Wang's eyes. She said: "Sometimes I wonder if I am selfish.

"If I gave up my job here, I would always regret it. I like my work here. I'm used to life here.

"But this time, when my child is small, this is a time that I will never be able to get back. I don't know how long we can continue like this."

Mr Wang may have had to leave Singapore, but through his work at Luoyang New-Link, he tries to give his countrymen the opportunity to walk in his footsteps.

Many of those who apply to Luoyang New-Link hail from the countryside. To reach out to these people, the company has a branch office in the rural town of Songxian, to which Mr Wang drives for more than an hour from central Luoyang every other week.

When the bridge to Songxian is blocked, he has to make a bumpy detour through a nearby village, a maze of narrow, muddy roads lined with hole-in-the-wall houses, rows of dark cabbages larger than a man's head, and gourds strung up to dry in the winter wind.

"This village is the kind of place where many of our people come from," said Mr Wang, who was in Songxian last month to give a talk to the families of those he has placed in Singapore.

Eager for updates on their loved ones, a crowd of about 60 thronged a draughty auditorium to watch, rapt, as Mr Wang showed them PowerPoint slides filled with glossy photos of Singapore's skyline, its public transport system, and of beaming Chinese workers in service uniforms.

One of about 900 licensed agents in China, Luoyang New-Link sends between 400 and 500 workers to Singapore a year. Most of these come in as work permit holders. They take up jobs as bus captains or casino croupiers. They work in factories, man fast-food counters, even clean stables.

The firm takes a cut of two months' salary from the workers they place, which Mr Wang estimated could be between $2,000 and $4,000.

He is aware of the resentment that some locals feel towards foreigners who they believe are taking their jobs. He maintains, however, that the jobs he fills are not those that locals want to begin with, which is why companies turn to foreign recruiters.

His business partner Zhao Wenhao, 29, said it was Mr Wang's experience in Singapore that made him the right fit for the job. "To have this kind of international experience in a place like Luoyang is rare.

"When he deals with the Singapore agents, he knows their expectations and can communicate with them very clearly. Based on his own experiences, he can also brief the workers well before they go over.

Said Mr Wang: "I like to think I am helping people change their lives by going to Singapore. I had that chance, and I changed myself. If there is one thing I regret, it is that I did not come to Singapore when I was even younger.

"I always tell the people I send - don't let your dreams stay dreams."

A version of this article appeared in the print edition of The Sunday Times on December 13, 2015, with the headline 'The recruiter from China'. Subscribe
Topics:
More
Whatsapp Linkedin FB Messenger Telegram Reddit WeChat Pinterest Print Purchase Article Copy permalink