In its editorial, the paper says that various theories have been advanced for the low incidence of the virus in the Mekong Delta countries and there may be some truth to all of them.

NEW DELHI (THE STATESMAN/ASIA NEWS NETWORK) - Even as the world grapples with the mounting tally of coronavirus cases - about 16 million at last count and deaths close to 650,000 - a success story has played out quietly in a swathe of Asia, almost unheralded and scarcely understood.

Five Mekong Delta countries with a combined population of 243 million, about 20 million more than Pakistan, have cumulatively reported less than 70 deaths, a little over 4,000 afflictions and today have just over 500 active cases.

Contrast this with say Pakistan (population 221 million) or Indonesia (273 million) and the difference becomes palpable.

So, what are Thailand, Laos, Vietnam, Cambodia and Myanmar doing that the rest of the world finds itself unable to do in controlling the dreaded virus?

But let us first look at the countries individually.

Thailand with a population of 69 million had until Saturday (July 25) reported 58 deaths and Myanmar (54 million) a total of six.

Thailand had reported 3,282 cases; Vietnam 415; Myanmar 346; Cambodia 202 and Laos just 20. Some of these countries have also started to return to normality.

Thailand for instance has opened its doors to some foreigners, re-opened schools and even permitted soapy massage parlours to commence business.

Cambodia, as early as May, lifted entry bans on nationals from six countries that had high virus incidences but whose dollars and euros the country needs desperately. They included the United States, Spain, France, Italy and Germany. 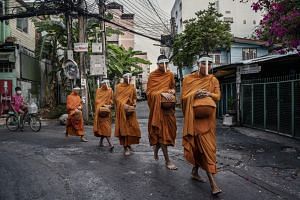 Coronavirus: No one knows what Thailand is doing right, but so far, it's working

As early as May, landlocked Laos opened schools and businesses, permitted restaurants and salons and cleared domestic travel.

On July 1, Vietnam started issuing e-visas to travellers from 80 countries. The country has also allowed several of its businesses to re-open including night clubs and karaoke bars.

Various theories have been advanced for the low incidence of the virus in the Mekong delta countries and there may be some truth to all of them.

For one, and possibly because of the influence of Buddhism, many of these countries had a culture of using face masks long before Covid-19 was detected.

Secondly, as a researcher told the New York Times, Thai people - and others in the region - do not favour body contact when they greet each other.

Thirdly, at least Thailand and Vietnam have robust health care systems, especially at the primary level, while Laos has a low population density of just 32 per square kilometre.

Curious researchers are studying the immune system of people from these countries to understand why Covid has been so effectively contained.

But until they come up with definitive answers, this will remain a mystery to be celebrated.