Whenever Taipei Main Station faces an electrical issue, Mr Yang Ting-feng becomes Mr Fix-It. He ensures that everything runs without a hitch.

A skilled calligrapher, the 63- year-old station staff member was also the go-to person when new notices and signboards had to be written to guide commuters.

For around 10 years, his elegant cursive penmanship could be seen throughout the station. But Mr Yang's handwritten signs were eventually replaced by electronic boards. "While it is a lot easier with the computer and the fonts are standardised and more modern, the signs and notices lack that personal touch," he ruefully observed.

CONNECTING PAST AND FUTURE

Everyone talks about Taipei 101 but it doesn't have the kind of history like the Taipei Main Station. But the station also has to represent the future in order to be an enduring landmark of Taiwan that people can remember.

MR CHOU YUNG-HUI, director-general of Taiwan Railways Administration, referring to the landmark skyscraper which, at 509.2m, is the world's eighth-tallest building.

FOCAL POINT FOR EVERYONE

Whether you are holidaying, working or studying here, the station is the starting point of everyone's experience in Taiwan. It is where life really begins. We must try to ensure that it will be a good start for all.

Mr Yang has seen plenty of change since he started working in the station in 1976, but the iconic building in the heart of Taipei has weathered the ups and downs of Taiwan's fraught history for even longer.

The station traces its roots back to 1891 when the first railway tracks were laid along the Tamsui River, linking Keelung, Taipei and Hsinchu. At that time, it was a freight station used for the transportation of cargo.

During the Japanese Occupation (1895 -1945), a modern-looking station was constructed on the current site about a kilometre from the old building and named the Taipei Railway Station.

Since then, the station has witnessed many of the island's milestones: the Kuomintang government fleeing to Taiwan after losing the civil war in 1949, as well as three power transitions since free elections were allowed in 2000.

Last year it was renamed Taipei Main Station to reflect the many modes of public transportation that now converge at the address.

To celebrate its 125th anniversary this July, the station, which the rail authorities now refer to as a "fifth-generation" station, has undergone a facelift.

Besides a new leak-proof terracotta roof, the station boasts a new lighting system that casts the building in lights of different colours every day.

In 2004, then President Ma Ying-jeou initiated an ambitious project to build two skyscrapers, the Taipei Twin Towers, next to the station. The towers were meant to house hotels, retail outlets and offices.

But a Malaysia-led consortium slated to build the development failed to pay the municipal government a performance bond. The project has been in limbo since.

The rail authorities, however, remain determined to keep up with the times and add more zing to the buzzing lifestyle and commercial hub. The Taiwan Railways Administration (TRA), which runs the station, will free up more commercial space for retail, dining and even hotels when its offices move out of the station by 2021.

"Everyone talks about Taipei 101 but it doesn't have the kind of history like the Taipei Main Station," TRA director-general Chou Yung- hui told The Straits Times, referring to the landmark skyscraper which, at 509.2m, is the world's eighth-tallest building. "But the station also has to represent the future in order to be an enduring landmark of Taiwan that people can remember," Mr Chou added. 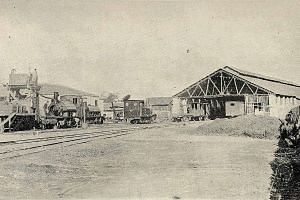 From wooden shed to underground complex

From a single-storey building that was about half the size of a football field in the 1950s, it has since grown to a massive six-storey complex with four basement floors.

Served by the high-speed rail, metro and regular train services, it is now an important transport hub for Taiwanese people and tourists who travel within and out of the capital.

The Taipei Main Station sees about 600,000 commuters and visitors each day. Numbers are expected to hit 700,000 when the MRT linking Taoyuan Airport and Taipei City opens at the end of this year.

Right next door is the Taipei Bus Station, where thousands of people catch their buses to head out of the city. The Taipei Main Station has also become a popular hangout for young Taiwanese and foreign workers. On weekends, many of them sit on the black-and-white-tiled lobby floor and turn it into a picnic area.

Breeze, one of Taiwan's biggest department stores, added more buzz to the station when it opened restaurants and stores on the first two floors in 2007. A Breeze spokesman said that sales at its restaurants and stalls have increased by about 10 per cent every year.

"It is so convenient as it is so accessible. We can just catch a train, grab a bite or just meet friends to chat and people-watch," said sales manager Sherry Tsao, 39, who passes through the station every other day.

As Taiwan's main commuter hub, Taipei Main Station comes under a lot of scrutiny. "We get a lot of exposure but it also puts a lot of pressure on us to be extra vigilant and ensure that nothing goes wrong," said Mr Huang Jung-hua.

Mr Huang has been the 24th station master of Taipei Main Station since last year. His daily routine involves three patrols around the station to ensure it does not get overcrowded and that it remains litter-free.

Mr Huang, 57, said he spends six days a week working in the station.

Experts say the rail authorities must continue to put commuter experience at the heart of future planning for the Taipei Main Station.

Transport observer and train enthusiast Vincent Chang, 48, said: "Whether you are holidaying, working or studying here, the station is the starting point of everyone's experience in Taiwan. It is where life really begins. We must try to ensure that it will be a good start for all."

Mr Chang has been helping the TRA to archive the history and evolution of the Taipei Main Station. With a nod to Tokyo Station and New York's Grand Central Station, he said: "The train station must be able to capture the soul of the island. It is not just a physical house but a home."

Sharing the sentiment is Mr Zou Jin-song, 78, who was station master of Taipei Main Station from 1985 to 1988. "It is not all about the additional frills and the cosmetic changes. People will never be satisfied with just that," he said.

"It is its people who are the heart and soul of the station. It will be their smiles and service that will make the station memorable."