NEW DELHI (REUTERS) - India and the United States signed an accord on secure military communications that both sides hailed as a breakthrough on Thursday (Sept 6), possibly opening the way for sales of sensitive US military equipment to India.

Before coming to India, Pompeo held talks in Islamabad with Pakistan's new government and generals, aiming to smooth over tensions after President Donald Trump took a tough new line towards Pakistan over longstanding accusations it is not doing enough to root out Afghan Taliban fighters on its territory.

The presence of US troops in Afghanistan has heightened US sensitivity to the rivalry between nuclear-armed India and Pakistan. Washington and New Delhi share concerns over Pakistan-based anti-Western and anti-Indian Islamist militant groups.

The Communications Compatibility and Security Agreement (COMCASA) that was sealed on Thursday had been stalled for years because of India's concerns that it would open up its communications network to the US military.

Pompeo said the accord was a "major step" forward that officials have previously said would allow the US to transfer high-tech equipment such as armed surveillance drones. New Delhi has been seeking the drones to monitor the Indian Ocean where China, a close ally of Pakistan, has been making repeated forays in recent years. 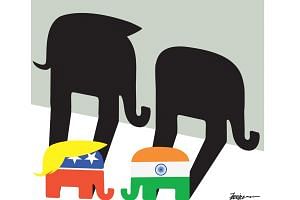 An 'Indo' wobble in the Indo-Pacific

India and the United States also agreed to open a hotline between their foreign heads and hold joint exercises involving the air force, navy and the army off the eastern Indian coast in 2019, the Indian government said.

"The momentum in our defence partnership has imbued a tremendous positive energy that has elevated India-US relations to unprecedented heights," Sitharaman said.

The United States has emerged as India's second largest arms supplier, closing $15 billion worth of deals in the past decade.

Experts believe the signing of the COMCASA agreement could also reduce the chances of the United States imposing sanctions on India for looking to buy Russian S-400 surface-to-air missile systems.

The United States has imposed sweeping sanctions on Russia, under which any country engaged with its defence and intelligence sectors could face secondary US sanctions.

However, a new defence bill proposes giving the US president authority to grant waivers when national security interests are at stake.

The United States is also pushing countries to halt oil imports from Iran after Trump withdrew from a 2015 deal between Iran and six world powers that was intended to stall Teheran's developing nuclear capabilities.

India is Iran's top oil buyer after China, and it is seeking a waiver from the United States.

Ahead of the talks in New Delhi, a senior U.S. State Department official said the United States was engaged in "very detailed conversations" with India over Washington's request to completely stop India's oil imports from Iran.

"We're asking all of our partners, not just India, to reduce to zero oil imports from Iran and so I'm confident that will be part of our conversation with India," the official told reporters accompanying Pompeo.