India and the United States have agreed to strengthen cooperation on maritime security, hold more naval exercises and "in principle" share and exchange military logistics, signalling a deepening alignment of interests amid China's growing assertiveness.

US Secretary of Defence Ashton Carter, who was in India for a three- day visit, met his Indian counterpart Manohar Parrikar yesterday, with both sides moving closer to finalising a Logistics Support Agreement.

The accord, put in cold storage by the previous Congress government, will see the armed forces of the two countries share military logistics such as by using military bases for refuelling or repairs of fighter jets and naval warships.

But New Delhi said US troops would not be stationed in India. 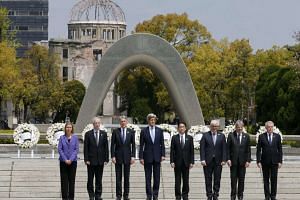 G-7 should stay out of maritime rows: China

"As our engagement deepens, we need to develop practical mechanisms to facilitate such exchanges," Mr Parrikar said at a joint press briefing, noting that the negotiations would be completed "in the coming months".

Mr Carter, who put off a visit to China this month but is on his second visit to India within a year, said that all the issues surrounding the agreement have been resolved.

He called ties between the US and India "one of the defining partnerships of the 21st century" and said both countries would hold more "complex maritime exercises" and a maritime security dialogue involving their foreign and defence ministry officials.

The US has been pushing for closer defence cooperation with India as concerns in the region grow over China's military ambitions.

China is embroiled in territorial disputes with Vietnam, the Philippines, Malaysia, Brunei and Taiwan in the South China Sea and with Japan in the East China Sea.

China's growing influence in the region, especially in South Asia, is of concern to India, which has a festering border row with its neighbour.

Indian Prime Minister Narendra Modi, unlike the previous government, has also been more forthright about deepening ties with the United States. But he too has been wary of India being dragged into the South China Sea dispute.

Mr Parrikar yesterday reiterated India's opposition to joint patrolling in the Asia-Pacific, an idea that Admiral Harry Harris, commander of US Pacific Command, had spoken of in India last month.

"We will not change our stand on joint patrolling," he said.

But he noted: "We will continue to work together to maintain peace and stability and to maintain an enabling framework for progress and prosperity in the Asia-Pacific."

"The US is quite clearly becoming the principal partner for (military) hardware and also for the armed forces exercises," said former Indian foreign secretary Lalit Mansingh.

"Under Modi, we are decidedly aligning towards the US and, importantly, deepening our defence relations."