BADIN, PAKISTAN (BLOOMBERG) - Near the rural town of Badin in southern Pakistan, about a four-hour drive from the financial capital of Karachi, dozens of men wait through the night for a chance to meet with Mr Zulfiqar Mirza.

The landowner's family holds sway in a part of Sindh province the size of the US state of Delaware, and villagers go to Mr Mirza for everything from employment to education to settling disputes. One of them, 69-year-old Khalid Hussain, said this month he needed help after being abandoned by his children.

The Mirzas "help people out", Mr Hussain said while waiting at the family's 700-acre estate. "I just want a job to feed my stomach."

Local power brokers like the Mirzas may end up as kingmakers in the nuclear-armed nation after a July 25 election, with polls showing that no single party is likely to win a majority in Pakistan's parliament.

For national politicians, courting large rural landholders known as "electables" is a Catch 22: Their support is essential to win elections in Pakistan, but many also tend to oppose measures such as modernising the country's labour and tax laws that would boost economic growth in the cash-strapped nation.

While urbanisation and redistricting has steadily eroded the power of rural politicians - about 10 city constituencies were created this year - in many areas they still can provide favours, administer justice and even pressure villagers into voting for a certain candidate.

"The common man does not have that much strength to stand up to the feudal lord - he will just squeeze him like anything."

That power structure has come under attack. 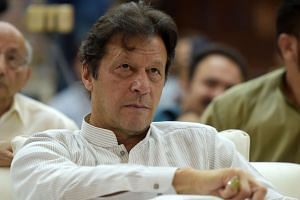 Since the 1970s, the country has alternately been ruled by the military, the Pakistan Peoples Party, and the Pakistan Muslim League-Nawaz led by Sharif, a three-time prime minister serving a jail sentence for corruption.

Yet even while railing against feudalism, Mr Khan has found it necessary to court key rural politicians, particularly in the breadbasket province of Punjab, which provides more than half the nation's federal seats.

The Mirza family in Badin is running with the Grand Democratic Alliance, a minority party that has not said who it will back for prime minister after the election. Mr Hasnain Mirza, the 34-year-old son of Mr Zulfiqar Mirza, acknowledged his family's political lineage but also denied it was feudal.

"The basis of support is from all the services rendered to them," Mr Hasnain Mirza said. "Where we fail to render services, people are free to walk with their backs against us. It's everybody's free will who they support and how long they deal with it."

Mr Hasnain Mirza also said the electorate has become more enlightened, and cracks were emerging in the biradiri system. "Those politicians who rely on patronage are fighting against time," he said.

Protests against landlords and their families have also taken place in cities.

During a rally this month in Karachi, the convoy of Mr Bilawal Bhutto Zardari - head of the Pakistan Peoples Party and son of assassinated prime minister Benazir Bhutto - was pelted with stones. At the last election, more than 10 feudal politicians lost their seats.

Mr Majid Khan, a 34-year-old stevedore from Karachi joined protests in June when his dynastic representative, who had barely visited the constituency in five years, campaigned in the port-side area of Keamari.

"Every leader who has not served us for five years should" be asked to answer to the people, he said.

"People are tired of the old guard," said research associate Ayesha Siddiqa at the SOAS South Asia Institute in London. Voters aged 18 to 35 comprise 44 per cent of the electorate, she said, and many will likely vote for Mr Khan.

Eliminating the system of political patronage in rural Pakistan "is not a one-day affair", said Mr Agha Siraj Durrani, a dynastic politician with the Pakistan Peoples Party, which has controlled Sindh's government since 2008.

Mr Durrani was the most recent speaker of the province's parliament, a role previously occupied by his father and uncle.

Even though his family wealth has been diluted over generations, Mr Durrani said his surname continues to hold sway under the biradiri system in his constituency after 200 years. "You look after them and they stand by you," he said.