ISLAMABAD (DAWN/ASIA NEWS NETWORK) - Ever since Donald Trump became president, there has hardly been a dull day in the White House.

It is often from the platform of Twitter that Mr Trump has aired his opinions, ranging from the comical to the downright dangerous.

He has taken potshots at political opponents and the media; he has also threatened sovereign states with obliteration.

Indeed, it is difficult to know when the leader of the world's sole superpower is bluffing, and when he is serious.

In keeping with his crude style of politics, the president's most recent tweets targeting progressive Democratic congresswomen of colour have also crossed the line.

Mr Trump has told four American women lawmakers of black, Latino, Muslim and Arab backgrounds to "go back (to the) places from which they came".

These appalling remarks have expectedly kicked up a storm worldwide, with many Democrats rightly lambasting the president for his "racism".

However, there has been an eerie silence from leading Republican lawmakers, indicating that the unrepentant president and his party are aiming to please their populist base ahead of next year's presidential election at the expense of propriety and progressive values. 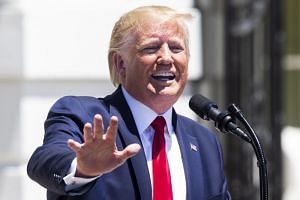 Trump says does not have 'racist bone' in his body

Trump defiant as lawmakers blast his 'racist' attacks on 4 congresswomen

Trump's attacks on Congresswomen challenge the idea of America

The US has had a long and chequered history where race relations are concerned.

During the Second World War, citizens of Japanese extraction were rounded up in concentration camps, while the dreaded Jim Crow laws enforced segregation and prejudice against Black Americans.

It was not until the civil rights movement of the 1960s that these repulsive laws began to be repealed.

Even in the recent past, the Black Lives Matter movement has exposed racial fault lines in the US.

But it is unlikely that Mr Trump will exercise more caution in discussing race relations, when he can so brazenly use vulgar, racist tropes to target political opponents - forgetting that three out of the four congresswomen are, in fact, natural-born Americans, and hence have no place to "go back" to.

Exploiting race, religion, sect and colour for political gains is a sign of demagoguery, and only promotes the agenda of xenophobic right-wing movements internationally.

Is Mr Trump suggesting that people of colour and Muslims have no place in America - a view that militant Islamist groups are also sure to use to their advantage - and that only whites are 'true' Americans?

He must back down from these divisive comments, lest they filter down to the roots of US society and widen the gulf between Americans of different backgrounds.