The truce in the trade war between the United States and China could be extended for another 60 days from March 1, it was reported yesterday.

The report by Bloomberg News coincided with the start of what looked like the last round of talks between both sides before the deadline for further punitive tariffs kicks in.

Citing people familiar with the matter, Bloomberg News quoted US President Donald Trump as saying on Tuesday that he was open to pushing back the deadline if both countries were close to a deal, though he added that he was not inclined to do so.

It appeared that Mr Trump was willing to give negotiators more time to continue.

Washington is due to increase tariffs from the current 10 per cent to 25 per cent on US$200 billion (S$271 billion) worth of Chinese goods by March 1 if no agreement is reached on the bilateral trade dispute.

US Trade Representative Robert Lighthizer and Treasury Secretary Steven Mnuchin are in Beijing for two-days of high-level talks with Chinese Vice-Premier Liu He.

Mr Lighthizer is tentatively scheduled to meet Chinese President Xi Jinping today at the end of the talks.

Yesterday, Chinese Foreign Ministry spokesman Hua Chunying said Beijing hoped to reach a mutually beneficial deal with the US as it would directly affect the future development and stability of the world’s economy.

“The best thing we can do now is to let the work teams of both sides calm down and concentrate on this consultation and strive to achieve a mutually beneficial and win-win outcome that both sides can accept,” she told reporters at a regular media briefing. 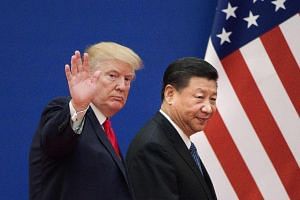 No certainty of US-China trade deal before truce ends: Experts

China exports shrink most in 2 years in December, raising risks for global economy

Apart from addressing the trade imbalance between them, the US wants China to make structural changes to its trade and industrial policies, including putting a stop to what it has charged was intellectual property theft and heavy subsidies of state-owned enterprises.

Washington has demanded “ongoing verification and effective enforcement” of reforms in such areas.

When asked if Beijing would agree to such a request, Chinese Commerce Ministry spokesman Gao Feng said yesterday that he understood it to be “speculation” of what was going on at the talks.

The ministry would inform the media of “the exact situation” in due course, he added.

Meanwhile, despite the ongoing trade tensions, China yesterday reported a surprising recovery in its trade numbers for January.

Last month, exports grew 9.1 per cent year on year, up from the 4.4 per cent decline registered in December, and imports contracted by 1.5 per cent. In December, imports declined by 7.6 per cent.

Bilateral trade between China and the US, however, continued to take a beating, with Chinese exports to the US down 2 per cent, while imports from the US plunged a whopping 41 per cent.

China’s trade surplus with the US narrowed to US$27.3 billion last month from US$29.9 billion in December.

Most analysts believe both sides want to avoid any further escalation in trade tensions.

“Based on the positive signals from the US-China trade negotiations, further tariff hikes will likely be suspended,” said Mr Louis Kuijs, head of Asia economics at Oxford Economics, a Hong Kong-based consulting firm.

UOB analysts wrote in a note that a  more comprehensive trade deal may not materialise until the second half of this year.

“Which may mean a further extension may be on the cards,” they said.