White House cites 'scheduling issue', even as India resists US sanctions on Iran and Russia

US President Donald Trump has turned down India's invitation to be chief guest during the Republic Day celebrations amid India's resistance to US sanctions against Iran and Russia.

The invitation to be chief guest at the parade is given to countries that India is keen to cultivate and sees as important for its foreign policy.

The parade in January consists of a fly-past of fighter jets and attack helicopters, marching contingents, dancers and floats from different states of the country.

Singapore Prime Minister Lee Hsien Loong and the nine other Asean leaders were invited as chief guests to the parade this year, while then US President Barack Obama was the chief guest in 2015.

The White House said India's invitation was declined due to a "scheduling issue" as the State of the Union address is around the same time.

The President "remains committed to deepening the US-India strategic partnership", a White House spokesman was quoted as saying by news agency Press Trust of India.

There has been no official comment from New Delhi, which is now looking to invite another foreign leader as chief guest. But the Indian media have wondered whether the decline was a snub to India. 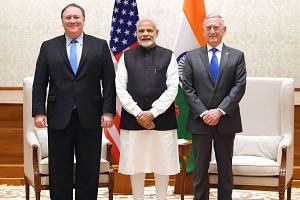 India, US closing in on package deal to remove trade irritants

Top US officials to visit India for high-level dialogue

Ties between India and the United States have grown on the back of mutual concerns about the rise of China, with greater military engagement and a pledge to work closely in the Asia-Pacific region.

India has also pursued closer ties with the US, while highlighting that its Indo-Pacific policy is not targeted at any one country.

Still, a number of minor irritants have crept into the relations recently, like US sanctions on Russia and Iran. India has resisted Washington's call to end oil imports from Iran, which is the South Asian country's third-largest supplier of oil.

Similarly, India signed a deal last month to acquire five S-400 Triumf air defence missile systems from Russia, even though the US had warned India that the deal was a "focus area" in its Countering America's Adversaries Through Sanctions Act, a federal law that imposed sanctions on Iran, North Korea and Russia.

New Delhi is hoping for waivers on both these fronts.

Analysts said the episode over the Republic Day invitation is embarrassing for India only because it was played out publicly.

Professor Rajesh Rajagopalan from the Jawaharlal Nehru University cautioned against reading too much into the incident, though he said "there are other areas which are problematic".

"They still have to figure out the state of discussion on sanctions with regard to Russia and Iran.

"There are reports of India buying more weapons from Russians as well as further oil deals with Iran.

"If India continues with this, it could cause problems in the relationship," he said. "Delhi may have to decide which is more important - Russia and Iran, or the US."

Trade issues have also become contentious. The US slapping tariffs on aluminium and steel imports with an eye on China have impacted India, which announced its tit-for-tat increase in import duties on over 29 US products. Trade talks are on to resolve the issue.

"Those (trade issues) have been tricky aspects of relations and could have an impact on ties," said Dr Rajeswari Pillai Rajagopalan of the Observer Research Foundation.

She added: "But US-India ties are positive and are being driven by the China factor. There is so much of strategic uncertainty in the Indo-Pacific. This will be a major factor that will keep pushing India and the US to come together.

"There might be temporary hiccups but the countries have been able to stay clear of minor irritants and keep larger strategic interests in mind."