NEW DELHI • The board of an ancient Hindu hill temple in southern India said yesterday it now favours allowing female worshippers of menstruating age to enter, reversing its previous support for a centuries-old ban.

The board overseeing the Sabarimala temple also said it would withdraw from efforts to challenge the Indian Supreme Court's ruling that the ban on entry for females aged 10-50 must be ended to uphold rights to equality of worship.

The temple in Kerala state has been the site of tension since the ruling in late September. Thousands of devotees have blocked attempts by women to visit the site. Some protesters have threatened the women and pelted them with stones, causing injury to some and damaging property.

Yesterday, the Travancore Devaswom Board told the Supreme Court it would abide by its decision to open the temple to women, after holding off for months saying it did not want to violate a historic tradition.

"After the Supreme Court judgment, we discussed a lot. We realise that we should respect the judgment of the court," lawyer Rakesh Dwivedi told Reuters.

The board had decided to withdraw from petitions challenging the lifting of the ban because it now believed it was discriminatory, its president, Mr Padmakumar, who goes by one name, was quoted as saying by Reuters partner ANI.

After the Supreme Court ruling, Hindu groups physically blocked some women from entering the temple, though a number managed to get in with help from the police. Devotees and petitioners in favour of the ban have contended that women should not be allowed inside the temple to prevent its deity Ayyappan from breaking the oath of celibacy he is believed to be observing. 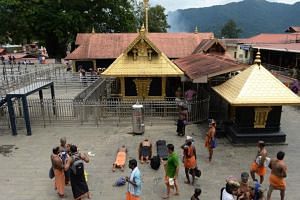 Why India's flashpoint temple, Sabarimala, is off limits to women

Some of them also consider menstruating women impure.

"The government has not shown the least respect to the sentiments of the devotees. The people of Kerala will give a fitting reply," Mr Sreedharan Pillai, state president of the BJP, said, blaming the state government led by a communist alliance of undermining Hindu traditions.

The temple pays homage to the god Ayyappan and draws millions of worshippers each year. Activist Rahul Easwar, the grandson of a former chief priest of Sabarimala, said the temple board had succumbed to pressure from the government.