NEW DELHI (AFP) - Master communicator and battle-hardened political scrapper Narendra Modi fought his way off the streets to become one of India's most popular and polarising prime ministers.

There is no middle ground between admirers and adversaries of the 68-year-old, who is on target to become the first leader of the Hindu nationalist Bharatiya Janata Party (BJP) to win two five-year terms.

After helping his father run a railway station tea stall in the small Gujarat town of Vadnagar, Mr Modi ran away as a teenager to devote his life to politics.

He now makes much of his humble roots, unashamedly portraying himself as India's tough guy protecting national security and Hindu values, and pressing the country's claims to be the world's rising power.

At traditional rallies where he draws crowds tens of thousands, Mr Modi fires up the masses like few leaders can.

He is also a social media ace, with more than 47 million Twitter followers - one of the world's top 20 most-followed accounts.

A specially-formed channel, NaMo TV, pumped out his speeches and rallies throughout the election campaign.

While doubts have been expressed over his economic reforms, little mud sticks to "NaMo". 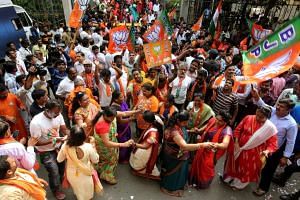 The secret to Modi's success

With his neat white beard and vast collection of headgear, Mr Modi regaled rallies with stories of how he is "a son of soil", contrasting himself with a Gandhi he said was a spoiled member of a dynasty that has dominated India since independence.

"They dislike me because of my humble origins. Can a party stoop so low?" he said at one event.

"Yes, a person belonging to a poor family has become prime minister. They do not fail to hide their contempt for this fact. Yes, I sold tea, but I did not sell the nation."

Mr Narendra Damodardas Modi is said to have joined the Hindu hardline Rashtriya Swayamsevak Sangh (RSS) nationalist group at the age of eight, and left home at 18 - abandoning an arranged marriage to become an RSS activist.

An assiduously hard worker - days off are rare - Mr Modi rose through the RSS ranks and then the BJP to become Gujarat's chief minister in 2001.

Bolstering the economy of the western state and espousing outspoken nationalist causes provided the launchpad for him to lead the BJP into the 2014 general election.

The country was seduced by his story and he won the biggest landslide in India's history, decimating Congress.

But Mr Modi is not without shadows in his history.

After a train carrying Hindu pilgrims was set on fire, killing about 60 people in 2002, riots broke out that left at least 1,000 people, mainly Muslims, dead.

Mr Modi was accused of complicity in stirring up the troubles, but a Supreme Court investigation team found there was not enough evidence for a case.

Sometimes his comments come back to haunt him.

While campaigning in 2014, he claimed to have a 56-inch muscle-man's chest to make tough decisions. His opponents and comedians still mock him as "Mr 56 inch".

Mr Modi has never given a press conference as prime minister, and critics say his rare television interviews are carefully stage-managed.

"Mr Modi believes that he is the lord of India, just like the British believed," Mr Rahul Gandhi said.

But Mr Modi's personalised politics were the defining issue of the Indian election, his party admits, and he carried the BJP - attending up to five rallies a day during the campaign.

He can be compared to founding prime minister Jawaharlal Nehru in his ability to dominate the conversation, said Dr Harsh Pant, an international relations professor at King's College in London.

"Modi dominates the message in an extraordinary way," said Dr Pant. "The young follow him because of his story, 'If I made it, then so can you.' He has the Nehruvian touch."

Dr Pant and others say, however, that Mr Modi's real impact will only be revealed when he completes that second term.