BANGALORE - Singapore has launched a plan to boost business partnerships with India through technological innovations.

Announcing the expansion of the government's Global Innovation Alliance (GIA) network, Minister-in-charge of Trade Relations Mr S Iswaran hailed it as a "milestone" in economic cooperation between the two countries.

It is an attempt to connect Singapore's technology start-ups and small and medium enterprises to India's tech ecosystem.

"The Indian start-up scene is very vibrant and Bangalore accounts for a quarter of the start-ups in India… The talent flow we can engineer through this partnership is immense," Mr Iswaran told The Straits Times on the sidelines of Techsparks, a tech start-up conference in Bangalore.

"What we really need is for governments to come together and create the enabling environment with assurances, regulatory standards and protocols so that the businesses can then work together without hindrances," he added.

India is already a significant trading partner of Singapore, with total bilateral trade amounting to S$26.4 billion in 2018. Singapore, whose investments in India have risen sharply in the past decade, became India's largest investor in 2018.

Much of that investment till now have been in traditional sectors like consumer goods and building infrastructure such as ports and airports as well as in property development.

The new alliance looks to directing attention to start-ups, especially in the digital space.

"India's growing e-commerce consumption, drive towards digitisation, and aspiration for infrastructure and urban solutions - not only smart cities but also physical infrastructure - are growing areas that Singapore companies can pay heed to," said Mr Ong.

"Singapore companies have been very adept at e-governance, digital solutions for security, and urban solutions that provide more efficient use of resources. In the consumption space of e-commerce, there is a need for last-mile fulfilment, and logistics companies that offer optimisation of logistics solutions can often find opportunities in India," Mr Ong added.

The innovation alliance in Bangalore was kick-started with Enterprise Singapore signing MoUs with three companies that will help start-ups set up, test bed and quickly scale up in India.

Anthill Ventures, an international speed scaling platform, for instance, was one of the MoU signatories. Nominated by the Singapore government to conduct an immersion programme, the company will hold boot camps a to demystify the Indian market and regulatory mechanisms for Singapore-based start-ups looking to enter India through Bangalore.

"Most companies keep throwing more money to scale-up and enter new markets. But the way we do it is to minimise initial scale-up costs by giving the companies access to distribution channels," said Mr Prasad Vanga, Founder of Anthill Ventures.

They would first start with the healthcare sector, he said.

"There are a lot of Singapore deep tech healthcare companies who need us to provide clinical studies at a large scale. After this, we might look at smart cities, urban solutions and clean water," he added. 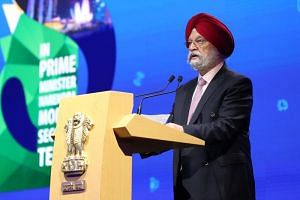 VersaFleet, a five-year-old Singapore-based transport management start-up which has worked from the outskirts of Chennai for a little over a year, found logistics was a huge opportunity in a country with a large population, growing affluence and personal consumption.

"The implementation of GST successfully by the Indian government facilitated an intranational movement of trucks. This created a great opportunity for automation," said Mr Shamir Rahim, Versafleet's Founder and CEO.

The company has been automating last-mile delivery and tracking for businesses in India for a year now.

For start-up companies from Singapore looking to move to the Indian market, Mr Rahim had some advice. He said: "In India, what you do is who you know. It might be counter-intuitive for many, but personal small networks are more useful than looking at large target markets and doing big analysis. Get a couple of anchor contracts and go from there."

"One billion people across a diverse country speaking in different languages, from different cultures you can't have the same sales pitch for all. We need to customise," he added.

For Indian companies, the cross-border connections with Singapore offer a gateway into South-east Asian markets. "The digital economy valuation for Asean, for example, is expected to grow from around $16-$17 billion to at least more than $215 billion by 2025. It is a significant market opportunity. We think that there is much scope to work together in collaboration," said Mr Iswaran.