Rosmah Mansor, the wife of Malaysia's former prime minister Najib Razak, pleaded not guilty yesterday to one count each of soliciting and accepting bribes over a solar hybrid project for rural schools in Sarawak.

According to the charge sheets, Rosmah allegedly committed the offences between March 2016 and September last year.

In the first charge, Rosmah, 67, is accused of soliciting RM187.5 million (S$61.6 million) in bribes - which is 15 per cent of the project's value - from Jepak Holdings managing director Saidi Abang Samsudin between March and April 2016.

It was allegedly to assist the company to secure a RM1.25 billion contract through direct negotiation with the Education Ministry.

In the second charge, Rosmah is accused of accepting RM1.5 million from Mr Saidi on Sept 7 last year. 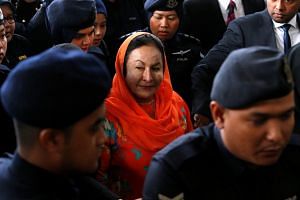 Jepak Holdings, a transportation services company, was appointed at the end of 2016 to supply diesel, repair generators and provide solar hybrid systems for 369 schools.

The case was the second time that Rosmah had been hauled to court. On Oct 4, she was charged with 17 counts of money laundering involving more than RM7 million.