Move by ex-ruling party comes ahead of final results; Khan offers to probe claims of vote-rigging

ISLAMABAD • Pakistan's former ruling party conceded defeat to cricket star-turned-politician Imran Khan ahead of final results from the country's disputed election, which European Union monitors have said was not fought on a level playing field.

Mr Khan, during a speech declaring victory on Thursday, offered to investigate opposition allegations of vote-rigging and said that he wanted to "unite" the country under his leadership.

The party of jailed former prime minister Nawaz Sharif initially rejected the so-far-incomplete results, but by yesterday, its leaders appeared to accept that Mr Khan would be the next prime minister.

"We are going to sit on opposition benches, despite all the reservations," said Mr Hamza Shehbaz Sharif, a parliamentarian and the nephew of the former PM, who is in prison after being convicted on corruption charges he disputes.

The claims of rigging in Wednesday's election followed a bitter campaign in which Pakistan's powerful military was accused of tilting the race in favour of Mr Khan, and trying to erase democratic gains made since the most recent spell of military rule ended in 2008.

The EU Election Observation Mission, in its preliminary findings, said the electoral process was "not as good" as the 2013 election and campaign week featured a "lack of equality" that meant it was not a level playing field for all parties.

Many of our interlocutors acknowledged a systematic effort to undermine the former ruling party through cases of corruption, contempt of court and terrorist charges against its leaders and candidates.

MR MICHAEL GAHLER, chief EU observer, who added that its observers had not witnessed any military interference in polling stations they assessed, but that vote counting had been problematic.

"Many of our interlocutors acknowledged a systematic effort to undermine the former ruling party through cases of corruption, contempt of court and terrorist charges against its leaders and candidates," chief EU observer Michael Gahler told a news conference.

The mission included 120 observers who visited 582 polling stations in all the provinces except Baluchistan.

Mr Gahler said EU observers had not witnessed any military interference in polling stations they assessed.

"On election day, polling was assessed as well conducted and transparent," he said.

"However, counting was somewhat problematic with staff not always following the procedures." 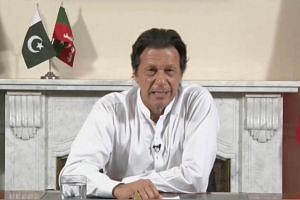 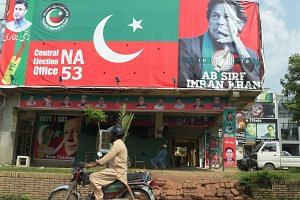 Although Mr Khan appeared likely to fall short of the 137 seats needed for a majority in the National Assembly, his better-than-expected results mean he should have no problems forming a government with a handful of small coalition partners.

Sharif's Pakistan Muslim League-Nawaz (PML-N) had 62 seats, the results showed. The Pakistan Peoples Party (PPP), led by Mr Bilawal Bhutto Zardari, was third with 43 seats. Both the PML-N and PPP say their party monitors at many voting centres were either kicked out during counting or had not received the official notifications of the precinct's results, instead being given handwritten tallies they could not verify.