COLOMBO (AFP, XINHUA) - Soldiers and police guarded mosques across Sri Lanka during Friday prayers amid fears of new anti-Muslim attacks after four days of riots that have left at least three dead.

Most Muslim-owned businesses in the island nation remained shut on Friday (March 9) in protest at attacks by mainly Buddhist Sinhalese groups concentrated around the central city of Kandy.

Armed troops and constables patrolled outside mosques, while in Kandy, prayers were said in open grounds in many places because mosques had been burnt or vandalised.

“There were no incidents during the Friday prayers,” a police official in Colombo said, adding that investigators had stepped up the search for those who took part in the violence.

Hundreds of Buddhist monks and activists staged a demonstration in the Sri Lankan capital Colombo on Friday to condemn the anti-Muslim riots that have killed three people and forced the government to declare a nationwide state of emergency.

The National Bhikku Front said they organised the silent protest against what they called “communal clashes destroying national unity”.

Sinhalese and Muslim civil society groups had staged a joint protest in Colombo on Thursday calling for tough action against the perpetrators of the riots.

At least 140 people, including the main instigator, have been arrested over the unrest, police said.

They named the main suspect as Amith Weerasinghe, a Sinhalese known for anti-Muslim activism and outspoken social media posts.
He was held on Thursday.

The riots, which began on Monday after a man from the Sinhalese majority died from injuries sustained in an attack by Muslims last month, have left nearly 200 Muslim businesses and homes destroyed. Eleven mosques were attacked.

Nine of the damaged mosques were in the picturesque tea-growing Kandy district, a draw for international tourists now suffering widespread cancellations.

Kandy residents said shops and offices were open on Friday and life was slowly returning to normal. 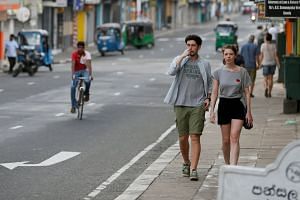 Muslims were seen inspecting the damage to their burnt out businesses. Troops guarded every junction while security personnel carried out patrols on motorcycles and in armoured personnel carriers.

Internet services, which were blocked across Kandy, were restored on Friday, but access to social media sites such as Facebook remained blocked across Sri Lanka.

The government declared a state of emergency on Tuesday as the unrest escalated when a Muslim man was found dead in a burnt out building.
Army chief Mahesh Senanayake visited Kandy on Thursday and promised an increased military presence near mosques.

Despite a security alert across the country, three boats belonging to a Muslim businessman just outside the Kandy district were torched early on Friday, police said. There were no casualties.

Prime Minister Ranil Wickremesinghe said on Thursday night that the riots had been a huge blow to Sri Lanka’s efforts to bolster tourism after ending a 37-year-old ethnic civil war.

The official Tourist Board said it was safe for foreign tourists to visit Kandy, but hotel operators say they have suffered large-scale cancellations.

“We had 80 per cent occupancy, but it has now dropped to about 30 per cent,” a deluxe hotel operator in the town of Kandy said on Friday, asking not to be named.

Sri Lanka received about half a million tourists in 2009, but the numbers shot up to 2.1 million last year, with nearly half a million visiting the island in the first two months of this year.

There have been several communal clashes in recent years in Sri Lanka. Sinhalese Buddhists make up 75 per cent of the country’s 21 million people, and 10 per cent are Muslims.

The police also held search operations in several areas in Kandy on Thursday night and said it had recovered more than 20 petrol bombs.